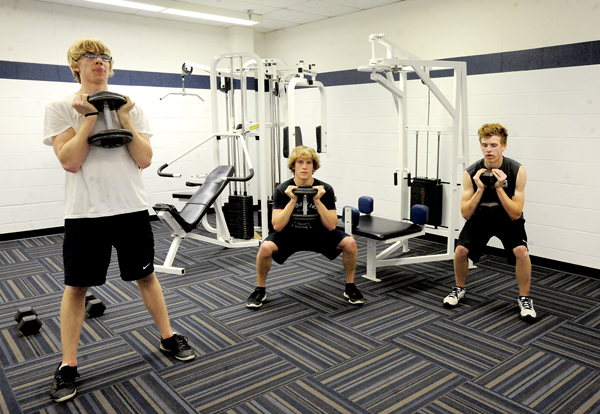 Three hockey players work out at the Albert Lea Family YMCA on Monday. Adam Herbst, Eli Malimanek and Nate Stadheim will be seniors on next year’s Albert Lea High School hockey team and are working with the girls’ hockey coach Paul Willett to build up muscle and strength. -- Brandi Hagen/Albert Lea Tribune

“To compete in athletics today, especially in the game of hockey, you need to be in the weight room year round,” Albert Lea girls’ hockey coach Paul Willett said. “To really be able to compete at their highest possible level they have to get bigger, they have to get faster and they have to get a lot stronger.” 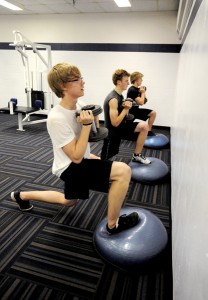 According to the rules of the Minnesota State High School League, coaches are restricted to only working with their players in June, July and the during the season of a particular sport.

Willett said the thinking behind the restriction is that kids might be tempted not to play other sports or start specializing in one sport early on in their careers if they are able to work with their coaches all year long.

The first session of the weight training ends this week. It had 22 boys working out four days a week. The next session will begin right away next week. There are four different time slots that players can attend each night.

Willett said it is set up that way so students can participate in spring sports and catch a workout after they’re finished with practice or a game.

“Whether they’re taking part in track, tennis or baseball the kinds of things we’re doing are going to help them athletically, not just in hockey,” Willett said.

Roy Nystrom, the coach for the Albert Lea boys’ hockey team is pleased with the turnout of Willett’s program.

“Every kid that was on the section tournament roster last season is participating,” Nystrom said. “That makes me feel pretty good. When we had our banquet at the end of the year I really stressed that we need to get bigger and stronger. We need to do something about it and it’s not going to happen overnight.”

Willett said in the program he has incorporated the techniques of NHL and college level strength and conditioning coaches.

“There are a lot of things these kids have never seen before,” Willett said. “It’s been a challenge for them, but they’re working hard and doing really well with it.”

Villarreal, a certified personal trainer, corrective exercise specialist and a group training specialist, said the goal is to get the players 20, 30, or even 40 percent stronger than when they first started.

“What that does to an individual is brings them to another level,” Villarreal said. “When you bring a whole team up to another level, that’s big. If they stick with the program and get that much stronger, they can be really tough.”

“I trained Bryce for three years. His power and his strength — we worked on that for a long time,” Villarreal said. “You don’t all of a sudden become a state champion. It shows you that it will pay off.”

“It’s nice when you have the girls’ coach, the boys’ coach and the trainers out there working on the same page,” Nystrom said.

The Blue Line Club, which is the boys’ hockey booster, has added an extra incentive for the players to attend every work out session.

According to the club’s current president Tom Falk, each hockey player who completes at least 75 percent of the weightlifting sessions will be reimbursed the up-front fee.

“It’s very beneficial for the hockey team to be strong and be able to compete with other tough teams in the conference,” Falk said.

Willett said currently there is no weightlifting program set up for the girls’ hockey team because virtually all of the players are participating in a spring sport.