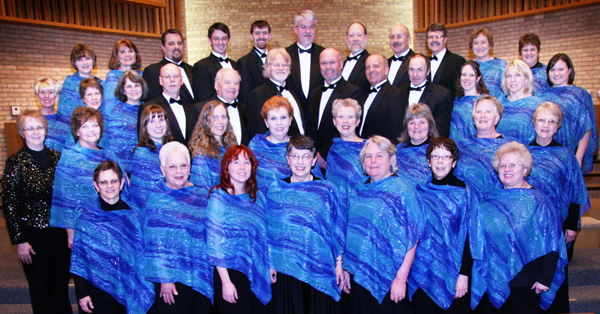 Members of the Albert Lea Cantori.

The Albert Lea Cantori will present a 40th anniversary concert on at 3 p.m. Sunday at the United Methodist Church in Albert Lea. The highlight of this concert will be a choral work commissioned by the Cantori to commemorate this milestone. The work entitled “William Shakespeare” was written by Argentinean composer Sebastian Modarelli. Modarelli is currently an organist and director of music at The Church of St. John the Evangelist in Rochester. He was born in Buenos Aires, Argentina, and studied piano, choral conducting and composition at the National Conservatory of Music. He also studied organ and was organist at several churches in Buenos Aires. In 2001 he was awarded a scholarship by the Italian government to continue his studies in Milan, Italy. There he earned a degree in composition.

He came to the United States in 2005 and has found new freedom in his composing. He performs organ concerts regularly and serves on the executive board of the Southeast Minnesota Board of the American Guild of Organists. The Cantori is excited to perform this choral work in celebration of the start of its 40th season. Former members of the Cantori will return to sing with the current choir in an alumni piece. The founder and first director of the Cantori, Gene Janssen, returns to direct this piece. The Cantori has members from Albert Lea and the surrounding area. They annually perform a spring concert and a Christmas concert with appearances during the year at other events. Gail Thurnau accompanies the choir. Eileen Nelson Ness has directed the Cantori since 1979.

This concert is free and open to the public. There will be donations accepted and a reception following the concert.