Funeral services for Alice Beatrice Hinkley, 95, of Albert Lea, will be at 1:30 p.m. Sunday at Bayview/Freeborn Funeral Chapel. The Rev. Cherie Daniel will officiate. Interment will be at Freeborn Cemetery. Visitation will be one hour prior to the service. To sign the guest book, go to www.bayviewfuneral.com. 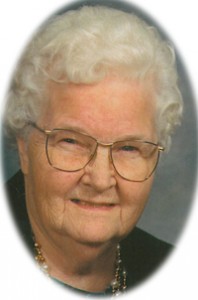 Alice Beatrice Hinkley was born on Feb. 1, 1917, at Granada, to John and Emma (Hitchcock) Collins. At the age of 7, she moved to the Freeborn area, where she lived until July 1998. Alice graduated from Freeborn High School. She is a member of Freeborn Congregational United Church of Christ and had been involved in Circle. On Jan. 7, 1937, Alice was united in marriage to Vernon Hinkley in Gordonsville.

Alice was a homemaker and enjoyed sewing and cooking. Alice was also the bookkeeper for Hinkley Chevrolet for 29 years. Alice and Vernon were married for 74 years and traveled to Paris, London, Florida and Texas. In her younger years, Alice made many quilts for her family and enjoyed making many from neckties. Her family was the most important thing to her. Blessed be her memory.

Alice was preceded in death by her parents; husband, Vernon in 2011; daughter, Lois Campbell in 1995; sons-in-law, Robert Campbell in 1998 and Philip Dulas in 1999; brothers, Burt, Glen, Victor, Ray and John Collins and sisters, Ruth Collins and Winnifred McKean.