Brightening up the place 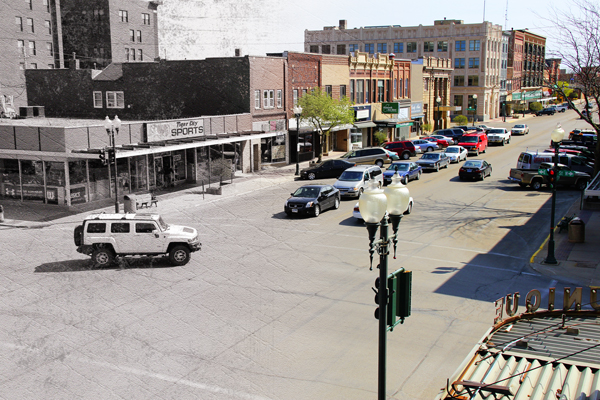 Organizers of Wind Down Wednesdays say holding events downtown gives the city’s center an improved sense of vibrancy. This gray-to-color illustration was photographed from a fire escape on the Unique Building above Jessica B’s Little Blue Studio on Tuesday afternoon. -- Illustration by Stacey Bahr and Tim Engstrom/Albert Lea Tribune

A new sort of fun is coming to downtown Albert Lea this summer.

A committee made up of local community members is planning an event called Wind Down Wednesdays on Broadway. 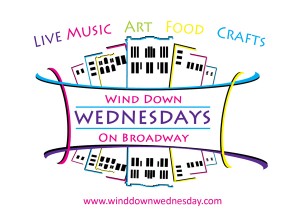 Planned for two dates — July 18 and Aug. 15 — the event will close Broadway Avenue from Main Street to Fountain Street and will be set up like an outdoor market, offering food, drinks, live entertainment and arts and crafts vendors.

“We just want this to be a really communitywide event,” said Linda Knudsen, one of the organizers. “We’re hoping it’s going to be beautiful weather.”

The idea came after the success of the first-ever fall festival last September. It is being mirrored after a weekly event in Rochester called Thursdays on First.

Linda Knudsen, owner of Plymouth Shoes, said a group of community members last year traveled to Rochester to its festival to learn about Thursdays on First and see what it took to put it on. Rochester officials in turn have offered to help Albert Lea’s festival become a success.

One key part will be the arts and crafts vendors, which will have tables for selling their items.

There could be anything ranging from drawings and paintings, to photography, jewelry and woodworking. There could also be textiles, paper goods, sculptures and pottery.

Vendors who would like to participate must apply through an application found at www.downtownalbertlea.com. Then, a group of people selected as a jury will review the applications and make sure the artwork or craft is 85 to 90 percent handmade.

Food vendors will also have to fill out an application to participate and must be licensed.

She said organizers are mainly focusing on attracting local artists for the first Wind Down Wednesdays event; however, they would like to reach out to places such as Austin to bring in other artists for the event.

Garbisch said the Art Center already has its exhibits scheduled through the rest of the year, but if everything goes well and the event comes back next year, the center will consider gallery openings the day of Wind Down Wednesdays to attract more people.

Knudsen said Crescendo owner Bob Tewes is considering having a booth again like the fall festival, in which he had demonstrations on the street on how to make some items off of his menu.

Organizers also hope to have some alcohol available at the event — if approved by the Albert Lea City Council — and people drinking will be given a cup with the Wind Down Wednesdays logo on it to use for drinks.

Knudsen said entertainment, planned by local singer Jennifer Ordalen, will be on two ends of the street. One stage called the Broadway Stage will be near the Marion Ross Performing Arts Center on Broadway Avenue and the other one will be set up in between the Freeborn National Bank building and the Shoff Chiropractic building.

According to Tami Staker, a member on the policy committee, the entertainment will be something acoustic so that the noise level is low, especially during the work day.

Knudsen said already planned for the first Wednesday is band Steve Sullivan and the Machine, local band Indiscrepancy, Tewes, among others.

Downtown shops will likely have other things planned. For instance, American Legion leaders have stated the club intends to set up some outside seating.

Staker said because the fall festival has been such a success, an event like this should do just as well.

“We’re trying to get away from the idea of nothing to do in Albert Lea,” Staker said. “We need to start mirroring other communities.”

Rain or shine, the event will take place.

“The heartier people will still be out there,” Staker said.

Wind Down Wednesdays will be geared toward an audience ages 21 to 55.

Staker said she hopes to get a nice variety of vendors and the committee will monitor the variety by limiting the number of duplicate products for sale.

Staker said only two dates are planned because the committee doesn’t know how the event will be perceived. If it goes over well, it maybe become a twice monthly event.

To get involved in organizing Wind Down Wednesdays, contact Knudsen at 373-6793.