Catering to a different crowd 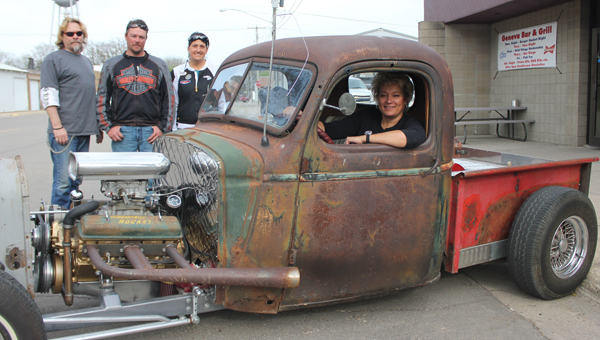 Barb Kuchenbecker, owner of Geneva Bar & Grill, sits in Obert Osmundson’s ratrod. She’s working to have events at the bar each night and is working to make Wednesdays a motorcycle and vintage car night. -- Kelli Lageson/Albert Lea Tribune

GENEVA — Vintage car and motorcycle enthusiasts are invited to a weekly event at Geneva Bar & Grill.

Owner Barb Kuchenbecker said she tries to have activities each night to keep the place busy and to have a place for the community to gather.

“I’m a promoter,” Kuchenbecker said. “I wanted to have a place for everyone to drive their cars to.”

She hopes avid drivers, motorcyclists and car clubs want to drive to the restaurant, mingle and talk about their vehicles. The establishment offers 1/2 off appetizers and $2 domestic bottled beers from 5 to 9 p.m. on Wednesdays to those who wear motorcycle or vintage car logos.

“Car clubs that come through are always looking for a place to drink or eat,” Kuchenbecker said. “People like seeing other people’s cars.”

While the idea is in its infancy, there were a few Geneva residents there on Wednesday including Obert Osmundson and Fred Vokoun. Osmundson had brought what he calls a ratrod, which is made up of many different parts he “just had laying around.”

“I built it three years ago,” Osmundson said. “It’s just a hobby.”

The car has so many different parts it’s almost indescribable. There’s the 1960 Chevy rear end, a 1930s box, a 1927 front end and parts from Chrysler, Chevy and Ford.

Vokoun brought his 1986 custom Harley-Davidson Softtail. He said he likes the idea of having a night where enthusiasts can gather.

Osmundson agreed that the event could be fun if enough people come to socialize.

“I really hope this thing takes off,” Osmundson said.

Other nights happy hour is from 3:30 to 6 p.m. On Mondays there are dart leagues and basket specials. Tuesdays are pool and bean bag leagues and taco night. Wednesdays, other than the new event, there are 49-cent wing specials, with different flavors each week. Thursdays are for bar bingo, and Fridays are fish fry night. Saturday nights there various food specials including hashbrown omelets made from 8 p.m. to midnight.

“We sell about 30 to 40 of those omelets each week,” Kuchenbecker said.

The owner uses Facebook to advertise different events and is still working to help people understand it’s not just a bar.

“The demand was here for more food,” Kuchenbecker said.

So in addition to the bar, there’s a full menu and liquor store at the site on West Main Street in Geneva.