Co-Players of the Year announced 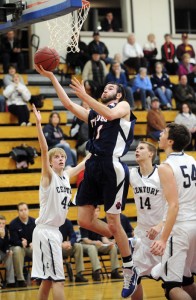 Ooms moved to Albert Lea before his sophomore season from Aplington-Parkersburg in Iowa. The 6-foot-6-inch forward added the ability to get to the basket this year and became tougher to defend around the basket.
“I decided going into this year to be the guy to take over games and create shots for myself when we needed a big bucket,” Ooms said. “I went out there and gave 100 percent every single play.”
Ooms will play basketball next season at Northwestern University in St. Paul. He decided in February to attend the school and plans on double majoring in youth ministry and education.
Ooms said once he visited the school he realized it was a good fit. He took in a basketball game and even got to hang out in the locker room postgame to hear the coach speak with his players.
“The coach and team seemed like great guys,” he said. “Everything felt right.”
Ooms said he was glad to move from “small-town Iowa” to Albert Lea where he was able to face tougher competition on the basketball court. He said he has a knack for converting and-1 plays (Ooms shot 349 free throws this season) and was more aggressive finishing around the hoop.
“Instead of being hit and falling away, I just go in there with the mindset that no one is going to stop me or get in my way,” he said.
Ooms said the highlight of his senior season was beating Kasson-Mantorville in the Section 1AAA tournament and moving on to play New Prague in the semifinals. He said the team grew together over the year and bonded over the highs and lows.
Ooms said he is excited for the challenge of playing at the Division III level and must become stronger and develop a jump shot before taking the court at Northwestern. He said he sees himself as a forward not a post and can take advantage of defenses with his quickness.

USC senior Kyle Bauman has committed to Winona State University
WELLS — United South Central’s Kyle Bauman said playing in front of thousands of fans at Bresnan Arena in Mankato this season was an “unforgettable” experience. After leading the Rebels to the Section 2AA finals for the first time in 12 years, the senior is now looking forward to playing in the same environment at the college level. 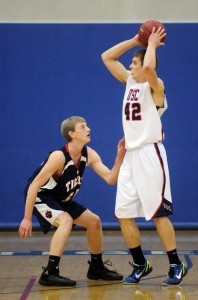 United South Central’s Kyle Bauman averaged 19.5 points a game this season. He passed on Division I offers to play in Winona.

Bauman, a 6-foot, 8-inch forward, signed a National Letter of Intent last November to play basketball at Winona State University. Bauman passed on Division I offers from South Dakota State University, Nebraska-Omaha and Lipscomb University to play the at DII school closer to home.
“The coaches are really good and I liked them when I went out to watch them practice,” Bauman said. “I liked the team and it was a great fit.”
Bauman averaged 19.5 points this season and led the state in rebounding with 14.7 per game. He also chipped in team highs in blocks (3.5), assists (2.8) and steals (2.2).
Bauman began being recruited during his freshman year when he stated playing AAU basketball at 6 feet, 6 inches tall. Bauman grew much stronger before his senior year after lifting rigorously three times each week during the summer.
Bauman and the Rebels finished 24-6 this season and 13-3 in the Gopher Conference, second to Waterville-Elysian-Morristown. The senior said the team was so successful because everyone on it was so close.
“That really helped a lot,” he said. “People stepped up when they needed to and made plays.”
The Rebels won 11 straight games at the end of the season, including a 43-39 win over top-seeded Hayfield in the Section 2AA South tournament. Despite playing in Bresnan Arena for the first time in his career during that game (USC students stormed the court following the win), Bauman said his fondest memory this season was playing against Maple River at home in the subsection semifinals. Bauman said the game’s tickets went on presale before selling out and the line into the gym went out into the streets.
“We got really hyped up,” he said.
Bauman played basketball on the Minnesota Select AAU team. He was named All-Conference for three straight seasons and an All-State honorable mention twice. He said he plans on majoring in composite engineering at Winona State.
“My teammates helped me be successful,” he said.