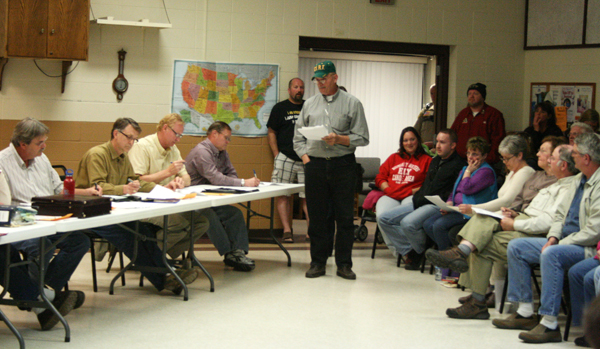 ELLENDALE — More than 70 residents of this community turned out Thursday evening to show their support for a 19-year city employee who was facing a dozen allegations of misconduct.

The allegations for Roger Swearingen — the city’s maintenance worker and dog catcher — ranged from parking his personal vehicle in the city’s garage, not reporting damage to a city truck, turning off a circuit breaker and using foul language toward a few residents, among other allegations.

The council voted not to take any disciplinary action on several of the seemingly petty items — such as the parking issue — and a few other issues were deemed inconclusive.

The council did, however, choose to issue a written warning for three instances where Swearingen reportedly lost his temper and used inappropriate language while on the job.

“You can’t do that to people,” said Ellendale Mayor Steve Engel.

Because a few similar instances had taken place previously, council members also decided to talk about the possibility of having Swearingen complete an anger management class.

City Attorney Phil Kohl had recommended a two- to three-day suspension without pay.

The decision came after about three hours of a review hearing that Swearingen requested be open to the public. Employee reviews are typically closed to the public, Engel said.

Though Swearingen declined to comment about the decision after the meeting — which ended right before 11 p.m. at the community center — he showed emotion several times throughout the meeting.

At one point, he even walked out of the room as his wife, Karen, talked about the stress the city has placed on her husband and in turn, herself. At that point, the mayor almost adjourned the meeting, but then Swearingen walked back in and asked to proceed.

A few community members, along with Swearingen’s wife, pointed out that while he has worked for the city for 19 years, he never started having problems until City Clerk Steve Louks reportedly became Swearingen’s supervisor.

One person asked whether Louks or any of the council members had a personal vendetta against Swearingen, noting that several of the allegations were petty.

Another questioned why some people were expected to follow rules while others were not.

One woman said if everyone’s employers chose to “nitpick” everything they did, there would probably not be one person who wasn’t guilty.

Several people talked about the countless hours Swearingen puts into his job — at all hours of the day — and the work that he has done in developing a veterans memorial for the community.

“Roger is out in the public eye everyday,” one woman said.

Swearingen said several of the allegations have been brought up as he is simply trying to do his job.

One allegation stated Swearingen reportedly drove through the ditch with a city truck; however, Swearingen said it was necessary to get to where he was asked to help.

He also admitted he has parked his personal truck in the city’s garage on previous occasions when it was raining as he just needed to run in and grab something for the job.

He also noted he has used his personal vehicle many times while on the clock for the city.

Engel pointed out that if something were to happen to him, it could be a liability issue.

A few of the allegations involved Swearingen’s access to the city’s garage.

People questioned how many others have access to the garage.

Engel said he and the other councilmen did not want to go through the hearing and pointed out that to his knowledge the allegations were not part of a personal vendetta against Swearingen.

The council will conduct another review of Swearingen in six months.

Swearingen said he has hired a lawyer and that the community can expect to hear more from him at a later date.

He resigned as the animal control officer during the heat of the meeting.