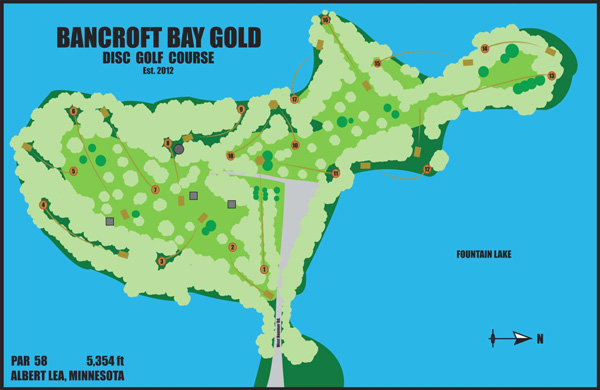 Teeboxx, a disc golf company, created this rough draft map of the disc golf course going in at the west end of Bancroft Bay Park. Local pro Ross Brandt is one of the owners of Teeboxx.

The nine-hole disc golf course on the upper end of Bancroft Bay Park will be expanded to an 18-hole tournament-approved course in a matter of a few months. 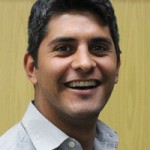 Organizer Ross Brandt, a professional disc golfer who moved to Albert Lea in August, said he hopes to have the course installed in July or August through the work of volunteer disc golfers and donations.

His plan calls for removing the nine-hole course on the park’s peninsula and replacing it with an 18-hole course that challenges disc golfers with a layout that frequently uses wooded corridors and the water’s edge. Brandt has considered naming it the Bancroft Bay Gold Course.

The expansion of the course will give Albert Lea two 18-hole courses at Bancroft Bay Park that meet Professional Disc Golf Association standards and one 18-hole starter course at Riverland Community College.

“I think we’ve done a terrific job as a community taking this to such a high level in three years,” Kehr said.

Brandt said the course is expected to be both functional and educational, with information about Albert Lea’s history posted on the sign to each hole.

Brandt, who has been touring the country professionally for five years and is sponsored by Vibram and other companies, wants to bring the finals to Albert Lea for the new Vibram Championship Series, which is six tournaments in six Minnesota cities for the best disc golfers.

He said the course goes through open areas, wooded areas and even open water, utilizing all the natural aesthetic features of the land.

“It’s beautiful out there,” Brandt said.

The course “had the opportunity to be very challenging and aesthetic,” he added.

One aspect the City Council didn’t OK was concrete tee pads, at least not right away. Brandt will have to place wooden markers to test the course until the Department of Parks and Recreation staff say he can move forward with concrete.

Brandt said he worries about the reputation a course without tee pads could garner and said tee pads would need to be in place before the tournament, which is slated for September. Otherwise, the finals would take place at a new course at Fort Snelling.

Between donations, grants and volunteer hours committed, the project has a price tag of $18,000.

The city isn’t footing the bill but will maintain the park, as in previous years.