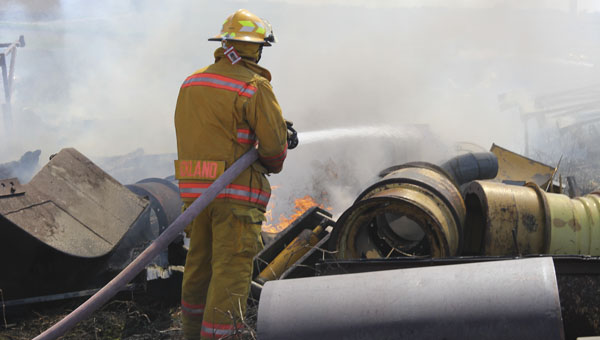 MANCHESTER — The fire chief of the Manchester Fire Department and the owner of Morreim Drainage are puzzled over what could have started a fire Thursday afternoon. 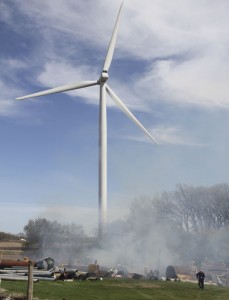 A fire burns Thursday afternoon at Morreim Drainage northeast of Manchester near a wind turbine. The turbine is part of the Bent Tree Wind Farm. -- Tim Engstrom/Albert Lea Tribune

A fire started in a field where Mark Morreim keeps railroad ties, telephone poles, barrels and rusted machinery like old trailers and old snowmobiles. His business is on his farm at 71610 263rd St.

A person spotted smoke and called emergency dispatchers at 1:50 p.m. Thursday. They knew there was no burn permit issued for the day, so Manchester Fire was sent.

Morreim was two miles away when the fire was called in. He said no one was home at the time. The field with junk in it is not near the gravel road that goes by the farm. It is about 500 feet from a wind turbine.

Manchester Fire Chief Rich Wichmann said the cause of the fire was listed as undetermined. He said the fire appeared to start on the eastern edge of the junky area.

It was a bright, sunny day with little to no wind. Morreim said the only possible cause he and firefighters could come up with was perhaps sunshine hitting broken glass and focusing the rays onto the grass below the old wood, sparking a fire kind of like when sunshine hits a magnifying glass.

No one was injured in the fire. Morreim estimated the damage to be nothing. He said the poles and ties are used if a retaining wall is needed or if a temporary walkway is needed through wet ground.