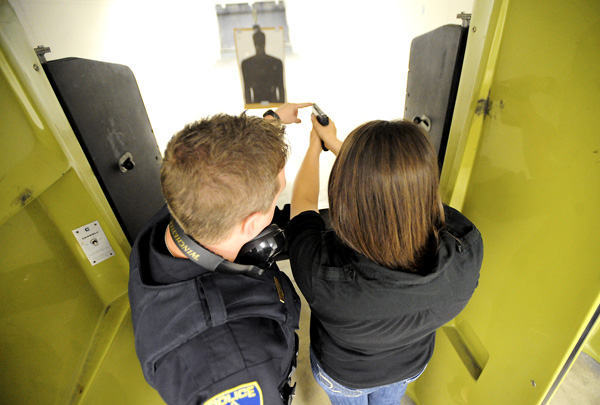 Officer Dave Miller of the Albert Lea Police Department shows Tribune reporter Kelli Lageson how to shoot a handgun on Thursday during a Citizens Academy class. Each student had the opportunity to fire 10 shots from a Smith & Wesson M&P .40-caliber handgun in the basement of the Freeborn County Courthouse. M&P stands for military and police. -- Brandi Hagen/Albert Lea Tribune

Members of the Albert Lea Police Department showed students in the Citizens Academy how to shoot a handgun on Thursday night.

Before shooting, Lt. Darin Palmer displayed equipment that SWAT members would use and explained the situation in which they would be used.

He passed around a tactical vest, a body bunker, a gas mask, three weapons and a recon scout.

The recon scout was a robot with a camera attached. The robot is a device that allows the SWAT team to locate people without actually entering a situation. It can handle a three-story drop.

Then officers Jacob Stockwell and Dave Miller talked about the parts of a sniper rifle, a Taser and a handgun.

Stockwell demonstrated how an X-26 Taser works. He told the class that officers have to have a refresher course in Taser training every year and said the peak voltage of a Taser used by law enforcement is 50,000 volts. For comparison, he said the voltage of a typical static shock like rubbing feet on carpet and then touching something is around 30,000 volts.

After the presentations, Stockwell and Miller took three students at a time to the basement of the Freeborn County Courthouse to shoot a Smith & Wesson .40-caliber handgun specially made for police and military purposes. They were each allowed to shoot 10 bullets at a paper target.