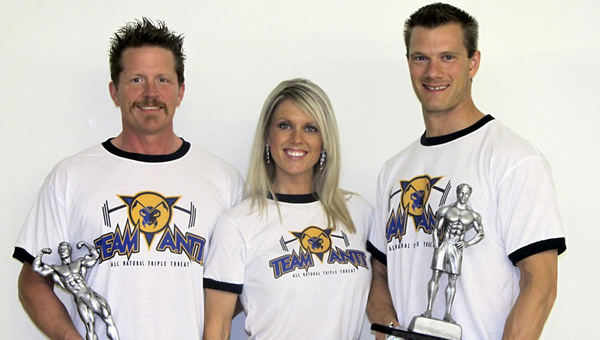 Submitted Trevor DeRaad, Alicia Wallace and Kurt Wallace stand with trophies they won at the 2012 NPC Gopher Classic in Eden Prairie in March.

DeRaad, along with Alicia and Kurt Wallace competed in the National Physique Committee’s Gopher State Classic bodybuilding competition in Eden Prairie on March 31.

The competition was held at the Eden Prairie Performing Arts Center with pre-judging in the morning and a show in the evening.

During the show, competitors show off mandatory poses to music of their choice. Then, there is one minute of free posing.

According to Kurt, there were 158 athletes making up the largest show in the 10 years of the competition.

The judging was done in different categories including fitness, figure, bikini and bodybuilding.

DeRaad, who took part in the bodybuilding masters competition said judges look at an individual’s size, symmetry, conditioning and muscularity.

In the physique category that Kurt competed in the judges look for a beach body.

“They look at your upper body,” Kurt said. “They don’t want you too ripped.”

The same was true in the bikini competition that Alicia took part in.

“The judges said she should have been in the figure division,” Kurt said. “She was too ripped.”

The three Albert Lea residents went by the team name ANTT, or All Natural Triple Threat.

The team wanted people to understand they are all natural because athletes aren’t tested for steroids during the competition.

“My buddy said about 95 percent of the people do take steroids,” Kurt said.

Instead, team ANTT went through strict dieting and training to earn their trophies.

Alicia and DeRaad started dieting 20 weeks before the competition, just before Thanksgiving.

“Our diet went through all of the fun holidays for eating, with us not being able to eat,” DeRaad said. “This is probably the first time in my life that I’ve lost weight over the holidays.”

Kurt, who has competed once before, didn’t start dieting until three weeks prior.

DeRaad said the dieting was the hardest part, especially in the final week.

“Monday through Thursday you’re dealing with zero carbs, just protein and a few vegetables,” DeRaad said. “You’re drinking upwards of two to three gallons of water a day. Then Friday you quit drinking until Saturday night after the competition.”

All three athletes placed in their individual competitions. Kurt was awarded first place in the masters physique, DeRaad was awarded third place in masters bodybuilding and Alicia placed sixth in the bikini competition. 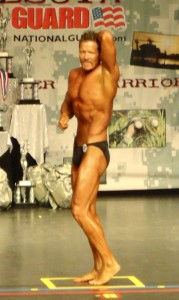 “We were ecstatic,” Kurt said. “Especially knowing we’re all natural. We weren’t sacrificing our bodies just for a trophy.”

Kurt said even though Alicia was disappointed with her sixth place finish, she is in the best shape of her life.

For Kurt, the Gopher Classic was his final competition. He said he competed because he wanted to redeem himself after his first experience in October.

“I don’t want it to be my lifestyle so I’m satisfied,” Kurt said. “Now I want to focus on my son’s activities. I’ve had my turn.”

Alicia and DeRaad plan to compete in the North Star competition in the fall. Alicia will probably try the figure division instead, and DeRaad wants to learn from his mistakes and try to place higher.