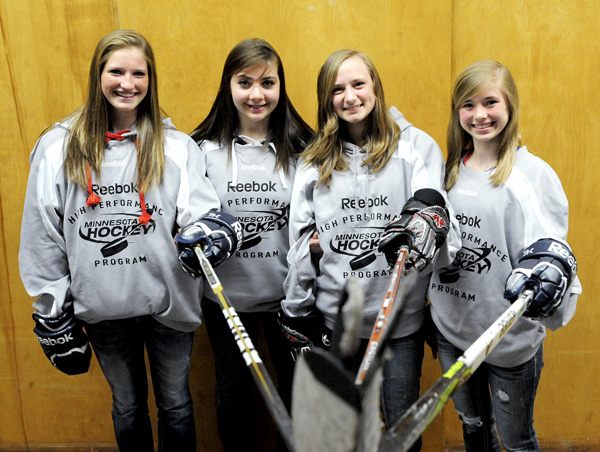 On Sunday, the team was narrowed down from 30 to 20 girls. All four girls from Albert Lea made the cut and will be participating in the seeding games this weekend in Rochester and Minnetonka.

None of the girls thought they would make it that far.

Savelkoul said part of the reason was because there were so many try-outs against girls who played varsity at bigger schools with a bigger hockey program.

“It feels good,” Schwarz said. “We were coming off a tough season and had a lot of frustration from losing so much.”

Englin and Schwarz have been playing on varsity for ALHS for two years, and Savelkoul and Larson just finished playing their first season.

Even though their coach, Paul Willett, isn’t allowed to coach the girls in the off-season due to Minnesota High School League regulations, they have been keeping him updated on their progress.

Willett has told the girls to keep their heads up when they make mistakes and not shake their heads about it and to play every shift like it’s their last because they’ll never know when the last shift will be up.

The girls said they have been trying their hardest because they want to be able to learn from the program and teach their teammates in the next hockey season.

“I want to make girls’ hockey more known and have people actually come to the games,” Schwarz said.

And even though they are missing their hometown coaches, they said they have learned a lot from the coaches in Rochester.

“With all the new coaches, we see hockey just a little bit differently,” Englin said. “We see new drills.”

According to the girls, being in the program brings out their competitive side more because they are going up against girls they already played in the regular season and now they want to get a better spot on the team than their opponents.

“Even though tryouts are officially done throughout these practices, you’re still trying out,” Savelkoul said.

The selection processes were divided up by districts. Albert Lea is in District 9 and has been in competition with hockey teams from Austin, Dodge County, Faribault, La Crescent, Mankato, Montgomery-Lonsdale, New Ulm, Northfield, Owatonna, Red Wing, Rochester, St. Peter-Le Sueur, Waseca and Winona.