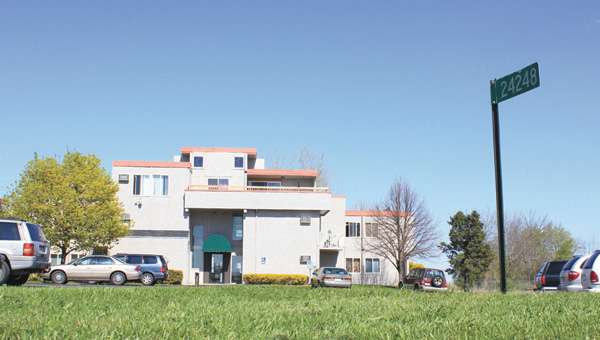 An assault that allegedly happened at this complex in Mapleview is now being called an attempted murder. It left a man on life support in a Rochester hospital.-- Matt Peterson/Albert Lea Tribune

AUSTIN — The Mapleview man who allegedly struck another man in the back of the head with a baseball bat on Sunday evening was charged Tuesday in Mower County Court.

According to the police investigation filed in court documents, a witness in the apartment called 911 and reported that a 39-year-old Sudanese male had been struck in the head after arguing with another man. When a deputy arrived, the victim was lying on the floor, surrounded by bodily fluids and not breathing or blinking, according to the court files. The deputy saw three men standing in the kitchen, one of whom was Rotgai. The files state Rotgai told the deputy a man in a white shirt was the assailant and fled the scene; however, one of the witnesses told the deputy, “He’s right here,” and pointed at Rotgai.

The deputy arrested Rotgai and took him to a squad car while two other officers gave the victim CPR, according to the files, and detected a heartbeat after four minutes of resuscitation.

Detectives interviewed the witnesses and Rotgai. One witness was allegedly in a bedroom, heard a loud argument and a “thud,” according to the court documents. They state when this witness came out of the room, Rotgai was standing over the motionless victim and struck him two more times on the back of the head. The witness then said he took the bat from Rotgai and called 911, according to the documents.

Deputies later found the bat in the witness’ bedroom. The witness told police he didn’t know how it got there.

According to the investigation, earlier, when the victim entered the apartment and asked for a DVD or CD, another witness was allegedly drinking with Rotgai. At this point, the witness says Rotgai grabbed the bat and struck the victim and once more while he lay on the floor. The witness also said the victim had no weapon on him and was not acting aggressively before he was attacked.

He claimed he was sleeping on his mattress in the living room and was awakened by a commotion and saw the victim fall, hit his head on the kitchen table and then the floor, the investigation states. Rotgai also said he’s never met the victim, did not own a bat and said the other men in the room claimed the victim was there to kill people, the court files state.