A Northwood, Iowa, man is facing multiple charges after he allegedly hit his girlfriend while in Albert’s Lea Hy-Vee and then assaulted others who tried to step in.

Phillip Patrick Drozda, 40, is also accused of assaulting a police officer who responded at the scene and spitting in the face of a paramedic. 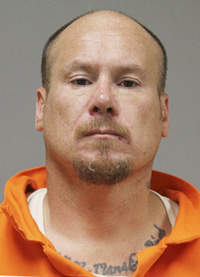 According to court documents, one witness told police he had heard Drozda arguing at the service counter with his girlfriend when Drozda reportedly hit the woman in the face with his left hand.

He then reportedly left the store, got into a gold-colored Pontiac Grand Prix, drove out of the parking lot and then up to the front entrance. He reportedly spun his tires and took off forward as the girlfriend tried to get in the car.

After doing this several times, Drozda got out of the car and his girlfriend sat down in the driver’s seat of the car, according to the witness.

The witness alleges Drozda hit the woman several more times. The witness yelled at Drozda to get his attention.

The woman tried to step in and pushed Drozda, but the man reportedly pushed her back and punched her in the face.

Drozda ultimately fled by foot southward into the parking lot of Northbridge Mall toward Shoe Sensation, where an officer found him.

Court documents state when officers and paramedics arrived, Drozda reportedly attempted to spit in the face of the paramedic and then allegedly kicked the officer at least eight to 10 times in the groin and then also in the back, arms, upper arms and even face.

Drozda has been charged with seven counts:

• Fourth-degree assault of a peace officer.

• Obstructing the legal process by interfering with a peace officer.

He reportedly smelled of alcohol when he was arrested.

He faces a maximum of five years in prison on the most severe charges.