Friends may call at Bonnerup Funeral Service from 4 to 8 p.m. Thursday. Burial will be private. A celebration of life service will be at 1 p.m. at the United Methodist Church of Albert Lea. 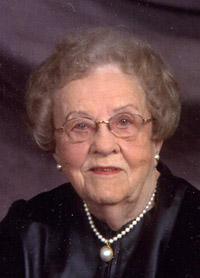 Margaret Marion Lillico was born Oct. 24, 1912, the eldest of six children, to Dr. J. Wilbert and Annie Ellen (nee Joynt) Lillico, in Glencoe. Her father was a Methodist pastor, who, with his brand new wife, emigrated to Minnesota from Ontario, Canada, in 1911.

Margaret’s childhood was spent in northern Minnesota, where her parents served pastorates in Wadena, Detroit Lakes, Duluth and Virginia. She graduated from Virginia High School in 1930, excelling in music, speech and drama. In September 1930, she enrolled in Hamline University, St. Paul, and met the love of her life, Robert Louis Myers, singing together in the Hamline a capella choir. She loved her Hamline years. She was a soprano soloist in the choir, participated in speech and drama, and her senior year was elected Hamline Queen.

After graduating in 1934 with majors in English and speech, she taught English and speech in Hinkley and Princeton. On June 17, 1938, she and Bob were married at Prospect Park Methodist Church in St. Paul. They lived in Minneota, where daughter Judy was born, moving to Pipestone in 1941. In 1942, after the outbreak of World War II, they moved to Sioux Falls, S.D., where Bob taught electrical fundamentals in an Army Air Corps Navigator School for the duration of the war. Another daughter, Janet was born in Sioux Falls.

In August 1945 the family moved to Albert Lea where Bob was employed as a business teacher. The family grew to three daughters in October when Susan was born. They moved to their house at 601 Sixth St. in September 1946. Bob’s teaching assignment changed to vocal music, and in 1947 son Richard was born.

Margaret was a stay-at-home mother for 20 years, from 1938 until 1958, when she was asked to teach vocal music in the Glenville School system, which she did for 20 years. She retired in 1978, and she and Bob continued their active community and church work, spent summers at their lake home near Deerwood and traveled extensively.

After Bob’s death in 1985, Margaret continued her active and busy life, traveling with family and friends both in the United States and abroad.

Margaret was passionate about many things: education, particularly higher education for women, her lovely home, her flower garden and beautiful roses, entertaining friends and family, her collections of glass, china and antiques, the Methodist church, Hamline University and AAUW.

One of her proudest achievements was the Robert L. Myers Art Series at the United Methodist Church of Albert Lea, which she founded and managed for 15 years, bringing excellent classical musical programs to Albert Lea and expanding the musical horizons of many concert-goers.

She was a 65-year proud member of AAUW, and served in both local and state offices. She was a past Worthy Matron of Eastern Star, active for more than 60 years. Also a 65-year active member of the United Methodist Church of Albert Lea, a soprano soloist in the choir for 25 years.

Margaret was a wonderful example of the “Use it or Lose it” philosophy. She focused on Use It, remaining in her home and driving until age 97. At age 95, she hosted around 200 friends for a birthday party – with dinner, dancing and a program. And last fall for her 99th birthday, she held an open house for around 150 people at Hidden Creek. She was busy and active right up until the end, managing her own affairs, enjoying stimulating conversation, good food and good company. Margaret was fortunate to have several special friends who made it possible for her to live life independently to the fullest: Brian Wolfe, Lois Benson, Don Hamberg, Barb Lysne, Rhodette Groe, Debra Beighley, Mary Slette and the staff at Hidden Creek.

In lieu of flowers, memorials are preferred to the Robert L. and Margaret Lillico Myers Endowed Scholarship fund of Hamline University, or to the Organ Voicing fund of the United Methodist Church of Albert Lea.