Funeral services for Mildred O. Hopperstad of Albert Lea will be at 2 p.m. Wednesday at the Grace Lutheran Church of Albert Lea. The Rev. Andrea Myers will officiate. Visitation will be from 4 to 7 p.m. Tuesday evening at the Bonnerup Funeral Service and one hour prior to the service at the church. Interment will be in Hillcrest Cemetery. 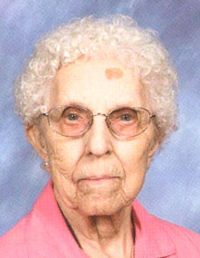 Mildred was born March 14, 1913, in Chickasaw County, Iowa, the daughter of John and Christy (Thompson) Jerdee. She attended country school in Iowa. Mildred was baptized at the Crane Creek Lutheran Church near New Hampton, Iowa, and confirmed at the Immanuel Lutheran Church. On Feb. 4, 1938, she was united in marriage to Julian Hopperstad in Waterloo, Iowa. Together they farmed Julian’s father’s farm until his death. The farm was sold and they moved to Albert Lea in 1943.

Mildred was a charter member of Grace Lutheran Church and was active in church circle, taught Sunday school, altar guild for many years, serving group, Bible study and the prayer chain. She worked for many years at the Albert Hotel and cleaned home for several people. Mildred was a member of the Eagles Club, the Albert Lea Senior Center and active in volunteering. She enjoyed making lefse and bread, reading, board games with family and was a Cub Scout leader. Her main focus was on her family and grandchildren.

She was preceded in death by her parents; husband; son John Hopperstad; daughter Marilyn Brandt; granddaughter Judy Nielsen; and two children in infancy.