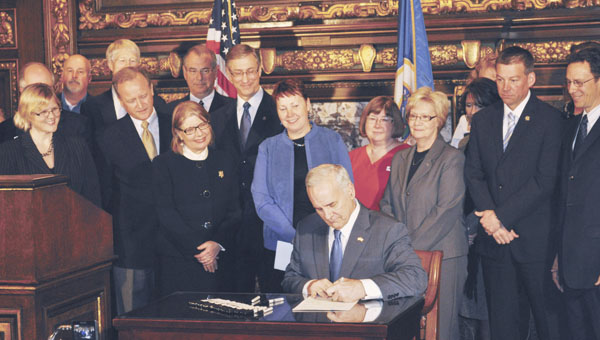 ST. PAUL — A bill aimed at protecting children and vulnerable adults sat Wednesday on a desk at the front of the small, ornate room, freshly signed by Gov. Mark Dayton.

Then came a special request.

Gail Loverink, of Mower County Human Services, asked Dayton for not one but two signing pens. Their recipients would be the two young Dexter boys whose child restraint case had brought the bill to life. Loverink said it was a form of closure for the children.

“They deserve to be able to move on,” Loverink said.

The public signing ceremony, which took place at the Capitol Wednesday morning, was a scene of upbeat enthusiasm. Rep. Steve Gottwalt, R-St. Cloud, the chief author of the bill, along with Rep. Jeanne Poppe, DFL-Austin, and Sen. Dan Sparks, DFL-Austin, who fought for it in the House and Senate, were present.

The bill makes it a felony to intentionally neglect vulnerable adults or abusively restrain children.

Under current law, even the most severe cases of neglect could only be charged as a gross misdemeanor with no prison time.

The bill was passed after receiving bipartisan support from legislators, agency commissioners and other activists, including a group of about five Freeborn County residents who are part of the Families Against Nursing Home Abuse support and advocacy group.

Myrna Sorenson, co-founder of the group, who attended the bill-signing ceremony, said she was pleased that legislators worked diligently to get the bill signed into law. It supports one of the goals of the group, which is to advocate for laws that will protect the elderly.

Almost four years ago, Sorenson’s mother was abused along with 14 others at Good Samaritan Society of Albert Lea at the hands of teenage nursing assistants Brianna Broitzman and Ashton Larson.

According to police, Broitzman and Larson spit water on residents, poked residents in the breasts, antagonized residents and inappropriately touched them, among other actions. The residents suffered from mental degradation conditions such as Alzheimer’s disease and dementia.

Hennepin County Attorney David Brown, who helped draft the bill, said he was not sure how the new law would have affected the Albert Lea case, but noted that the new law deals mainly with negligence and deprivation of vulnerable adults — or what a caregiver does not do.

“While there isn’t anything that can be done for our loved ones, and while we have been blocked and turned away at every turn, that’s not going to happen anymore,” said Jan Reshetar, co-founder of the group.

She said she hopes the new law, teamed with education, will prevent these types of cases from being shielded.

“By making these laws and by changing the education, hopefully these people who are working in nursing homes will become more and more aware that there will be less and less tolerance,” Reshetar added.

Sparks said legislators listened to many people when considering the bill and worked hard to get something to happen.

Dayton himself was upbeat, making small talk and cracking a joke or two while he welcomed attendees.

“It’s a great day,” he announced as he passed out pens from the signing. “I’m proud to sign the bill.”

When Poppe took the podium, she briefly reviewed the story of the Dexter parents whose child restraint started the gears turning and led to the bill. She put special emphasis on the contributions of the teacher, social worker and county officials who helped bolster the bill’s case in the eyes of the Legislature.

“They testified and gave a strong voice,” Poppe said. She smiled broadly when she shook hands with Dayton, mirroring the general excitement of the room.

Sparks said the bill was on life support a few times and there were doubts as to whether it would end up going through.

The Mower County officials present were pleased to see the bill signed, too. They had been an active part of the bill’s climb through Legislature ever since the sentencing of Dexter parents Brian and Charity Miller last July. The parents were convicted of chaining their then 5-year-old son to his crib and withholding food and bathroom access from him and his 8-year-old brother. They could only be charged with a gross misdemeanor because of the need for “substantial” bodily harm.

“We realized there was an issue with the law,” Sandvik said. He and others from Mower County had been up to the Capitol twice already in previous months to testify in favor of the bill. “Our representatives did a wonderful job moving it forward.”

Sandvik said the Millers’ case was an unusual one.

“This was such a personal crime to these children,” Sandvik said. “It wasn’t like the physical abuse we often see. I can’t imagine a parent doing this to a child.”