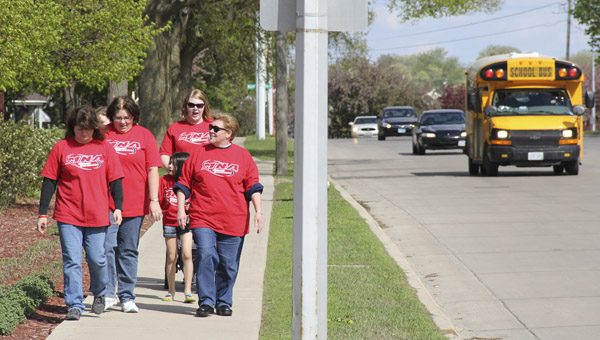 Five nurses and two of their children walk westward along Fountain Street on Wednesday wearing red Minnesota Nurses Association T-shirts as part of a demonstration. Two more soon joined them to make seven. The nurses at Mayo Clinic Health System in Albert Lea have been without a contract since July 2011. -- Tim Engstrom/Albert Lea Tribune

If you’ve driven along Fountain Street in front of the medical center recently, you might have noticed women wearing red T-shirts walking up and down the sidewalk.

They are union members participating in a demonstration.

About 120 nurses who work at Mayo Clinic Health System in Albert Lea are members of the Minnesota Nurses Association and have not had a contract in place since last July. On late Wednesday afternoon, seven of them participated in the demonstration. They have had 10 demonstrations in the past three weeks, they say, with numbers ranging from five to 15.

Nurse Lexie Light said they hope the contract dispute can be resolved before this July. She said they walk to let administrators know the nurses stand together.

Administrators with Mayo Clinic Health System in Albert Lea could not be reached for this story but, more than likely, can provide a response for an upcoming story. Many were in Austin for a meeting Wednesday afternoon on how the Albert Lea and Austin facilities can share resources.

Nurse Louann Stoen, representing the demonstrators, said of all hospitals where nurses are represented by the MNA that Albert Lea is at the bottom for nurse wages. Nearly all nurses in Albert Lea are part-time workers. She said the pay scale stops at 20 years. She said administrators want nurses to pay more for health insurance and want to increase what are called mandatory cancels — when schedulers can cancel hours nurses were slated to work, which in turn decreases take-home pay.

Stoen has 30 years of nursing experience.

Light, who also has 30 years of nursing experience, said the more experienced nursing staff “still does not feel appreciated.”