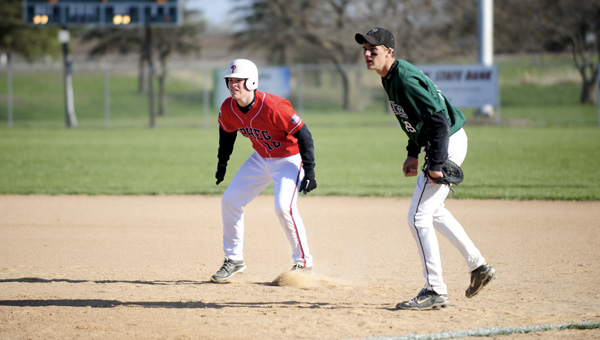 A NRHEG player gets ready to steal second base during Monday’s game against Waterville-Elysian-Morristown. -- Brandi Hagen/Albert Lea Tribune

NEW RICHLAND — The New Richland-Hartland-Ellendale-Geneva baseball team played their entire line-up in the first inning against Waterville-Elysian-Morristown on Monday. 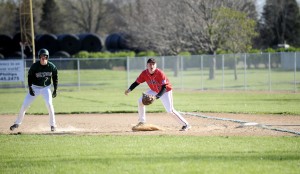 Carter Tollefson waits for a Waterville-Elysian-Morristown player to hit the ball on Monday in New Richland.

The Panthers, who returned nine seniors this season, were able to score seven runs to WEM’s two at the end of the first.

“It was the first inning,” Panthers coach Jeff Reese said. “There was a lot of game left, and we knew we’d be in a battle.”

They kept their five-point lead until the top of the third when WEM’s Cody Reinke and Derek Masberg scored. The game became tied when Ben Boran hit the ball to left field and out of the park. Boran, Luke Nuetzman and Tate Harmon all scored for the Buccaneers.

“I think we just settled in,” Reese said. “We couldn’t get that big hit and it started to wear on the guys.”

In the top of the third, the Panthers substituted David Lassahn for Sam Lundberg on the pitching mound.

“He pitched a real fine game. He came in when we needed him,” Reese said. “He only gave up one more run when he came in. David was key tonight and he shut them down.”

The Panthers trailed 8-7 until the bottom of the sixth. The first two players to bat hit ground balls to left field which were quickly thrown to first base. With only one out left, the pressure was on.

“We’ve battled from behind before,” Reese said. “We didn’t feel comfortable, but we had a chance.”

The fifth player up to bat for NRHEG in the sixth inning boosted confidence levels by sending one man home.

Soon after, three more runs were scored giving the Panthers a three-point lead.

WEM scored one point in the top of the seventh before the game was over.

The Panthers, who started out with a good lead, won the game just two points ahead.

NRHEG will play its sixth game of the season at home 5 p.m. Thursday against Janesville-Waldorf-Pemberton.