Tim Stoneking isn’t a musician by choice. It was his birthright. 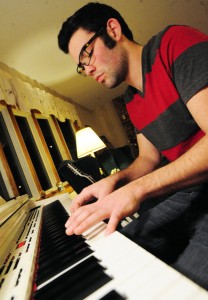 Tim Stoneking plays on his family’s Kurzweil digital piano in his living room. Stoneking was taught how to play piano by his gradma at 7 years old.

The 19-year-old was born into a musically gifted family, and when his small finger first pressed the ivory key of a piano, it began a career he hopes lasts a lifetime.

Stoneking, of Albert Lea, followed the typical path of a young musician. He began playing piano as a 7-year-old, taught by his grandma, and joined choir in elementary and band in middle school. As a teenager, Stoneking first picked up a guitar, and during his sophomore year at Albert Lea High School strummed and sang in front of a live audience for the first time at Tigers Roar, the school’s talent show.

Now an adult, Stoneking is part of two bands and is writing and recording music on his own and posting tracks to YouTube and Facebook.

Stoneking is now a veteran on the stage, but while he loves performing he doesn’t love the fanfare, so he plans on making music his profession by making others famous.

“Being famous would be cool, but not really,” Stoneking said, on second thought. “I want to perform and enjoy it rather than it be my job. I want to be the guy behind the scenes for the big names.”

Stoneking graduated from ALHS in 2011 and is working at Herberger’s, with plans to enroll at Riverland Community College for fall semester. After he earns an associate’s degree, Stoneking plans on attending the McNally Smith School of Music in St. Paul to study to become a music producer.

“I’d like to spend the rest of my life recording and producing,” he said. “It has become a hobby of mine, and I’d love to peruse it further.”

In the meantime, Stoneking is making music in Albert Lea.

In addition to guitar and piano, Stoneking plays the bass guitar, ukulele, mandolin and sings. He started the band Riptide during his junior year of high school with classmates but is working on a side project called Panic Switch. As a member of these bands, Stoneking has performed at the Big Island Bar-B-Q, Eagle’s Cancer Telethon and a local battle of the bands outside of Bergdale’s Harley Davidson, to name a few.

Riptide won the battle of the bands and was rewarded a recording session with Merle Krause, owner of Marshall Street Music, which they plan to take advantage of in the coming months.

Stoneking said both bands began by playing covers but have since begun making original music.

“I love getting to more or less take what you like from other songs and make them your own — to morph it into your own style,” said Stoneking. “It’s all the same four chords over again brought into new light.”

Stoneking said he prefers writing instrumentals to lyrics, but when he does have to words to a song he collaborates with his bandmates. He’s written one song as a solo artist and recorded it, along with other covers, on his Macbook.

“I like to change some of the covers up a little bit and make them my own,” Stoneking said.

Stoneking said he didn’t have a choice to get involved in music at a young age. His mom, Julie, was a piano teacher and his dad, Steve, sang at church. His two older brothers, Andrew and Matt, and twin sister, Emily, were also musically gifted. Andrew sang in Nordic Choir at Luther College in Decorah, Iowa, and now is a high school choir director in Sioux City, Iowa. Matt is involved in the Albert Lea’s Community Theater and Emily plays the tenor sax in Luther’s band.

Stoneking said he’s always loved singing and played around with musical instruments whenever he had the chance.

“In high school, it was the only thing I really excelled at,” he said. “When I got home it was a way to blow off steam.”

Stoneking, who’s favorite instrument in the guitar, said while he’s been involved in music his entire life, he became even more passionate about it once he joined a band and started creating his own.

“My sophomore year really got me over the hump,” he said. “It brought me into the realization that I can actually do this.”