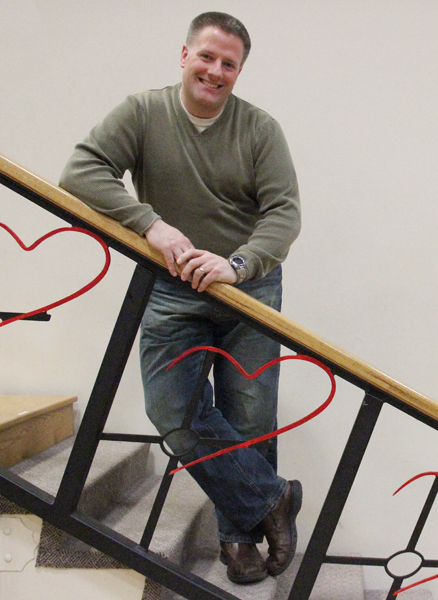 Crossroads Church is a growing church, and its leaders don’t want to become a large, cold church where congregants can’t work on their faith.

Its new associate pastor, Torrey Zimmerman, wants to make sure people feel comfortable and can be active in their faith. He has some experience with this, as his last church, in Anchorage, Alaska, was even larger than Crossroads.

“You can choose to come to church and be anonymous, but others want support,” Zimmerman said. “We want to make small environments for that to happen.”

Zimmerman said he hopes to create small groups where people can connect with others and continue to work on their faith.

“The Christian life is meant to be lived out,” Zimmerman said.

Zimmerman, 39, moved to Albert Lea in January with his wife, Clare, and three children, Ana, 12, Grace, 8, and Eric, 5. Clare works from home. He said they’re still adjusting after living in Alaska but like the Albert Lea area so far.

“We had gotten used to living with mountains all around,” Zimmerman said.

He said that while Albert Lea is small, it also seems close-knit. He’s excited to continue to get to know parishioners, of which there are about 700 at Crossroads.

“I’m excited about the opportunity to lead and to follow,” Zimmerman said.

Zimmerman said he used to work in the corporate world, and said he had a clear sense of calling. That brought him to Trinity Evangelical Divinity School in Deerfield, Ill.

He said the interview process with Crossroads was quick, and he was glad that parishioners were confident in him.

Zimmerman said he will do some administrative work as well as direct pastoral work. He’s hoping to learn more about church leadership because one of his long-term goals would be to be a senior pastor.

“For the time being, I’m very happy,” Zimmerman said.

He spoke highly of the church’s volunteers and said they’re committed and passionate. He also appreciates the children’s ministry, and the church’s history of being involved in the community.