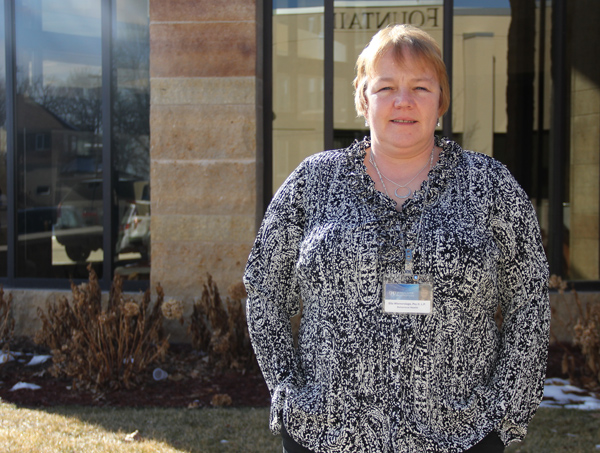 Dr. Ella Wiemerslage poses for a photo outside Mayo Clinic Health System in Albert Lea where she works as a psychologist. — Kelli Lageson

Dr. Ella Wiemerslage, a psychologist, is one of the new employees at Mayo Clinic Health System in Albert Lea. She was working in Thief River Falls for the independent medical center in that town but wasn’t fully satisfied.

She preferred being closer to her family in Decorah, Iowa, and felt she was too far away from a big city, like Minneapolis. She had previously lived in Denver, and missed being near a metropolis. Driving from Thief River Falls to Minneapolis takes about 6 1/2 hours, and she enjoys the arts, shopping and other amenities the Twin Cities offer.

But uprooting her family wasn’t easy, and though they’ve been in Albert Lea since the summer of 2010, she said they’re still adjusting and unpacking. It helped that she knew a colleague who worked at the hospital in Albert Lea, who encouraged her to apply at the medical center.

There have been some challenges with working at a completely different hospital, and even more from moving to an independent hospital to a big system like Mayo Clinic. She had just gotten used to using a different computer system when Mayo upgraded its system.

“I had to learn two computer systems in one year,” Wiemerslage said.

There are far more positives than negatives though, and she said she’s overwhelmed with all the resources within Mayo Clinic and in the southern Minnesota region.

There is one big difference between her last job and this one — at the last hospital she was responsible for both inpatient and outpatient cases. Since Mayo Clinic Health System in Albert Lea does not have a psychiatric unit, here she only sees outpatients, meaning patients who are not staying at the hospital. Patients who need to be admitted have to go to another facility in the region.

Wiemerslage said most of her time is spent doing one-on-one work with patients. She identifies their problem, then tries to find issues that could be causing it like family history or lifestyle and then finally works with them to resolve it or refers them to other medical professionals.

“I help figure out the issues and then what will make them better,” Wiemerslage said.

For instance, if someone came in saying they can’t sleep, are gaining weight and not enjoying life or not happy, Wiemerslage asks about their family history and lifestyle. For someone with those symptoms, which could indicate depression, she would recommend therapy and/or medication. She mostly works with teens and adults but has worked with children occasionally.

Wiemerslage said she liked the area and the community a lot. She was impressed by the school system, which was important to her. She has two children, Kade, 16, and Bess, 10, who attend Albert Lea Schools. Wiemerslage attended college in Winona and Decorah, Iowa, before graduating from Luther College. She got her doctorate at the University of Denver.