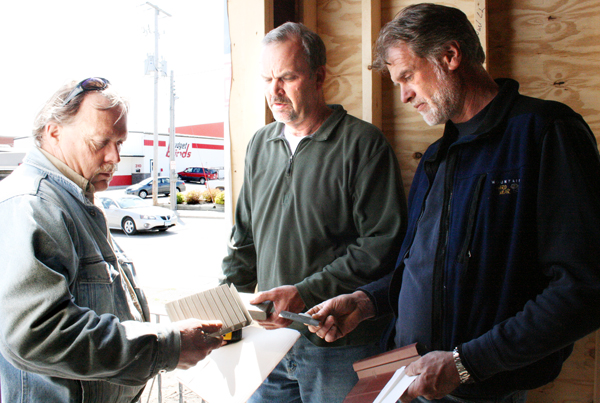 Two area real estate businesses, known for their location next to Albert Lea’s hospital, are moving across town to the former KATE Radio building. 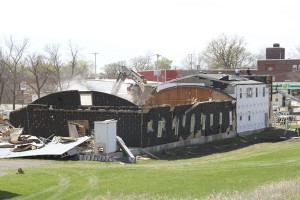 An excavator on April 5 demolishes the Quonset portion of the new home for Leland Realty. The work is visible to motorists coming over viaducts on West Main Street. -- Tim Engstrom/Albert Lea Tribune

The former location, at 226 W. Fountain St., east of Mayo Clinic Health System in Albert Lea, was sold to the hospital last July.

Mark Ciota, CEO of Mayo Clinic Health System in Albert Lea, said in a statement last month that hospital officials are still evaluating how the property will be used. What will happen to the house there, known for its historical value, has yet to be seen.

“I do know that they appreciate the integrity of the building,” said Bill Leland, broker of Leland Realty.

The company had been on Fountain Street for at least 10 years.

“We’re sad to leave, but we’re very excited to be going to this new location,” Bill Leland said. 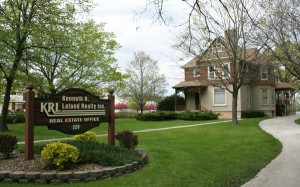 The new location, on the corner of West Main Street and First Avenue, has been the source of many changes during the last few weeks, as contractors work to reconstruct the building.

Tom Leland, who is also a consultant and developer, said he purchased the property in 2003 because of its prime access and visibility — and because of its unique zoning, which allows for residential, general business or light industrial.

The only major problem, however, has been the mold and mildew at the site, a reason KATE moved out. The station’s offices are now in Skyline Plaza.

Contractors have essentially gutted the building and are starting clean. Everything has been sprayed down with bleach and water, and the entire building will be sprayed with an environmentally friendly insulation. New furnaces have been installed.

On Friday, electricians and contractors were at the site.

Tom Leland said vinyl siding, new windows and a steel roof will be installed, along with a deck and a patio.

A Quonset at the back of the building has been torn down, and garages are expected to be put up. Even the 1,500-square foot apartment above the main level will be redone to make way for a new tenant.

He said the work is being completed by several local companies, including Boyum Builders, Freeborn Lumber, Albert Lea Electric, Jim & Dude’s, among others.

When it’s completed, all of Leland Realty and Gateway Commercial staff will be on one floor.

Bill Leland said he likes that the new building is at a lighted intersection.

Prior to KATE, the building housed two egg companies, and farmers from all across Freeborn County would bring their eggs there, Tom Leland said.

Prior to the location on Fountain Street, Leland Realty was at the Lea Center, in the space currently housed by KIMT.