Memorial services for Rebecca “Becky” S. Adams of Albert Lea, will be held at 2 p.m. Sunday, April 22, 2012, at Our Savior’s Lutheran Church. The Rev. James Kassera will officiate. Friends may greet the family one hour prior to the service at the church on Sunday. Interment will be in Graceland Cemetery. 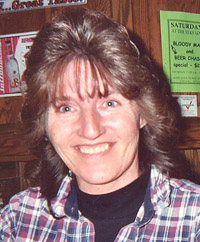 Becky was born Dec. 9, 1961, in Albert Lea, the daughter of Russell and Marsha (Christopherson) Behrends. She was a graduate of Albert Lea High School.

Becky was a member of Our Savior’s Lutheran Church and had been employed by the Albert Lea Elks Club, Kwik Trip as a sales associate and a hub tex driver for Larson Doors & Windows.

She loved to play bingo, going to the casino, crafts, crocheting, fishing, playing cards, collecting tiger items and especially spending time with her kids and grandkids.

She was preceded in death by her parents, nephew Joshua Baldwin, grandson Antonio Mendez and grandson Caleb Stuart.