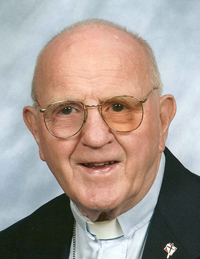 Kermit lived in Emmons area until 1944 when he enlisted into the Navy. He graduated in 1942 at age 16. After graduation, he worked as a farm hand while waiting to turn 18 so he could join the U.S. Navy. He was a member of the Emmons Lutheran Church until 1968 when he returned from the mission field and took a pastoral position and transferred his membership to St. Paul’s Lutheran Church in Millard, Neb.

Kermit served in the Navy during World War II on the USS Curtiss as an aircraft mechanic and a non-commissioned Petty Officer. He partook in the Battle of Okinawa and then served in Shanghai, China, as part of the liberation forces. It was during this time that Kermit experienced what he called a “distinct and verbal” calling from the Lord to go and serve the Lord as a pastor. On Jan. 27, 1946, Kermit was honorably discharged from the U.S. Navy.

Once home he enrolled at St. Olaf College in Northfield from 1946 to 1950 where he met and later married Marian Ruth Miller on June 6, 1948. Upon his graduation with a Bachelor of Science degree in Latin and Greek, Kermit enrolled at Luther Theological Seminary in St. Paul where he received his Master’s of Theology degree in 1953. He was then ordained as a pastor in the Evangelical Lutheran Church and was commissioned to go to Madagascar as a missionary in June 1953.

A memorial celebration will be at 2:30 p.m. April 22 at Shepherd of the Valley Lutheran Church, 3900 Ashworth Road, West Des Moines, Iowa. Interment will be a private ceremony at the Emmons Cemetery in Emmons. Memorials contributions will be used to fund continuing mission work in Madagascar. Send memorials to Roisen Family, c/o Paul Roisen, 4420 3rd Ave, Sioux City, IA 51106. Condolences may be expressed at www.hamiltonsfuneralhome.com.