Memorial services for Robert “Bob” S. Peterson of Albert Lea will be held at 10:30 a.m. Wednesday at the First Presbyterian Church, Albert Lea. The Rev. Dwight Netzer will officiate. Interment will be in Graceland Cemetery. Military honors will be accorded by Albert Lea Veteran’s organizations. Friends may visit with family from 4 to 7 p.m. Tuesday at Bonnerup Funeral Service, Albert Lea, and one hour before the service at the church. 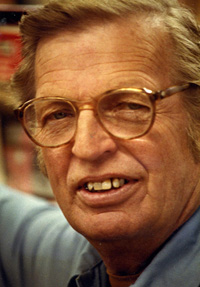 Bob passed away on Saturday, March 31, 2012, at Mayo Clinic Health System in Albert Lea. He was 86. He was born on Aug. 10, 1925, in Freeborn County, the son of Bert and Hannah (Nelson) Peterson. He grew up in the Clarks Grove area and attended Clarks Grove Schools. Bob enlisted and proudly served our country in the U.S. Army Aircorps.

When he returned from the service, Bob began working in construction. He later worked for the city of Albert Lea, being the first to operate a dredging machine and then spending the rest of his career working for the city as a mechanic.

He married Mildred Nesset in on Nov. 24, 1946, in Northwood, Iowa. She preceded him in death. In 1980, Bob married Margaret Wangen Satter at Trinity Lutheran Church in Albert Lea. He was a member of the American Legion and the V.F.W. In his younger years he was a motorcycle enthusiast. In his later years he found much enjoyment in the game of golf. He also enjoyed his fishing trips up north visiting his brother-in-law.

Bob was preceded in death by his parents; his first wife Mildred in 1979; brother Richard Peterson; and stepdaughter Leslie Ann Satter.