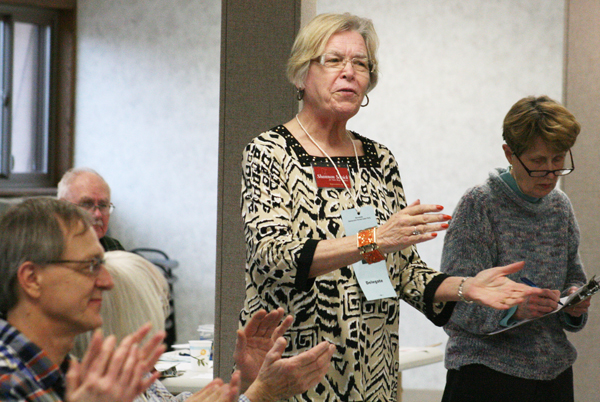 DFL District 27A candidate Shannon Savick of Wells thanks the crowd of delegates Sunday afternoon after receiving the party endorsement for the seat. -- Sarah Stultz/Albert Lea Tribune

DFL delegates in District 27A on Sunday endorsed former Wells Mayor Shannon Savick to face off against Republican Rich Murray in the November election. 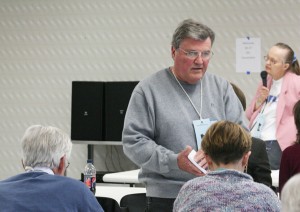 Bob Haas hands out ballots Sunday for District 27A delegates to use while voting for an endorsement for the seat. -- Sarah Stultz/Albert Lea Tribune

Savick received 26 out of 31 possible votes during a secret ballot at the Senate District 27 endorsing convention at the Union Center in Albert Lea.

Four people voted to have no endorsement, and one person voted to support last-minute candidate Bryce Samuelson.

Savick, who had planned to run for the Legislature in District 24B before the districts were reorganized, thanked everyone who supported her and said she plans to start walking door to door at the end of May.

“I will work hard for the election,” she said.

Raised in Faribault County, Savick said she decided to run after seeing firsthand in Wells how the Legislature’s decisions can affect small communities.

“They’ve just shifted the burden onto local governments,” she said.

At one point, she had to ask herself if she should fire a police officer or raise taxes.

“I don’t think we are being represented rightly with the current Legislature,” she said.

Savick has a master’s degree in business administration and has worked in the high-tech computer industry for more than 20 years.

Samuelson, of Dodge County, said he had been considering running for the seat for some time.

“I hadn’t made the decision until today,” he said. “I thought I’d throw it in and see what happens.”

Murray, contacted about the endorsement Sunday evening, said he did not know much about Savick.

“Right now I’ve just been focusing on getting our legislative session wrapped up,” Murray said. “Campaigning is still a few weeks off.”