ELLENDALE — The Ellendale Area Heritage Society and concerned residents are working together to make sure a piece of history doesn’t disappear forever. 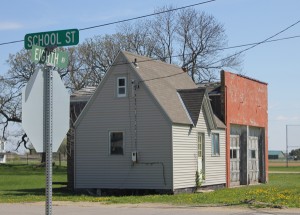 Former students of Ellendale are working to see that the above building can be moved to the Steele County Fairgrounds’ Village of Yesteryear. -- Kelli Lageson/Albert Lea Tribune

Kathy Paulson, a Geneva resident who graduated from Ellendale High School in 1970, is just one of many volunteers contacting old classmates to see if they’ll donate to help keep a landmark alive. That landmark is Gus’ Station, a gas station that opened in 1931 and was a part of the community until 1981. Because of its proximity to the school in Ellendale, Paulson said many students have memories of running to the business to buy candy or snacks during lunch break.

To save the landmark, they’re hoping to raise enough money to move it permanently to the Steele County Fairgrounds’ Village of Yesteryear. Because the building’s current foundation is in disrepair and the difficulty of moving the building, the group is hoping to raise at least $10,000 but possibly up to $15,000. 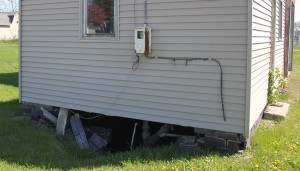 The foundation of the building is in disrepair, and along with moving costs, is the reason the group is fundraising.

“There’s a lot of history in the building,” Paulson said.

Some think it is the first gas station to come to Ellendale, and at one time there were up to four, while now there is just one, off the freeway exit to the town. The former gas station sits at the corner of School Street and Eighth Avenue, which used to be Highway 30 through town.

For a time in the 1930s the Jefferson Bus Co. had a stop at the station, and it’s had different names throughout the years. It had been a Phillips 66 and also Standard Oil. During World War II a young couple used the building as their home. But in 1946 Gus and Hilda Jacobsen bought it to reopen it as a gas station. Gus added two service bays, which are on the east side of the building.

The heritage society and its supporters hope to move the building as soon as possible as the foundation is quickly deteriorating and becoming a hazard. If anyone has questions concerning the moving and restoration of the building they can contact Lloyd Kaplan at 507-451-3572 or at jackiekap39@hotmail.com.

Donations can be sent to Barbara Mrotz, PO Box 255, Ellendale, MN, 56026. Checks can be made out to the Ellendale Area Heritage Society, and write Gus’ Station in the memo line.