Shooting was more fun than expected

Thursday was one of the most fun nights of Citizens Academy I’ve had yet. We first learned about the SWAT team from Lt. Darin Palmer, then officers David Miller and Jacob Stockwell taught us about the department’s policies on using force and about the various weapons before we went to shoot in the indoor range at the Law Enforcement Center.

Shooting on the range

As you saw in Friday’s paper and online, we got to shoot a Smith & Wesson M&P .40-caliber handgun (M&P stands for military and police.) 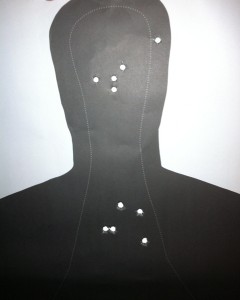 Each participant could shoot 10 bullets at the target Thursday night.

As you can see from my photo of the target, I did OK! The target wasn’t terribly far away, and I had great teaching. Miller and Stockwell explained they were very concerned with our safety before we were allowed to go down to the range. Only one person was allowed into the range with Miller, but I did bring along photographer Brandi Hagen.

First I got a pair of safety goggles and ear protectors. Then before any bullets were even near the unloaded gun, Miller had me pick the gun up and showed me the correct way to hold it. He advised me to get as much of both palms around the handle and to keep my finger from the trigger until I was ready to shoot.

He then taught me how to load the bullets and then cock it back. Then we looked at the three sights on top of the gun, which help you aim. There are two outer sights, and you line up the middle one between the two to aim.

Then it was finally time to shoot! I should preface by saying I’ve shot one other gun, once, in my life and that was a shotgun. This was my first experience with a handgun.

Miller said I had 10 bullets, and that I should take my time with the first five. Then with the last five I could shoot in quick succession or however I wanted.

I put on my ear protectors and lined up the sights on the gun and pulled the trigger. It was loud, and the shell bounced up and nicked me on the head, which I wasn’t expecting. Miller had told us to only point the gun at the ground or down the range, so I resisted the urge to turn around.

I shot my first five bullets aiming at the chest of the target, then I shot the last five at the head. Even though I had no more bullets, I didn’t want to stop. It was definitely a rush to feel the gun kick back, see the flash and hear the loud bang. I’ve read that shooting a gun temporarily increases testosterone, and I did feel strong after shooting. I was also pretty keyed-up and energetic after shooting.

I’m glad I took the option to try shooting (no one had to shoot if they didn’t want to.) I can’t imagine being a police officer and in a situation where I needed to shoot, because it took a lot of concentration to remember how to hold my hands correctly and then line up the sights so I’d be able to hit my target. Also shooting a gun without ear protection wouldn’t be fun, and Miller said many long-time police officers have hearing problems.

Before we had gone down to the shooting range, Stockwell and Miller talked about when using force is necessary and when it’s legal. They went over the statutes that explained when they’re able to use deadly force.

Stockwell also gave us a demonstration of the Taser each officer is equipped with. He turned off the lights and shot the Taser at a target on a piece of cardboard. Then he passed around the two small fishhooks that connect and apply the 50,000 volts.

Some other highlights include that it’s against their department policy to shoot without meaning to cause harm, meaning they can’t fire warning shots or shoot out tires because they could accidentally harm someone. Also, if they do use force they must immediately give medical aid and do their best to help that person.

Palmer’s presentation on the SWAT team was also very enlightening. SWAT stands for special weapons and tactics. It’s a paramilitary tactical unit that has been trained to respond to high-risk operations like hostage rescue and counter-terrorism operations.

Albert Lea is part of the South Central Drug Investigative Unit tactical team, which comprises full-time licensed police officers from the police departments of Albert Lea, Owatonna, Waseca and Janesville and from the sheriff’s offices of Waseca and Steele counties. They cover the areas of Freeborn, Steele, Waseca and Faribault counties, but have gone to other areas like recently when they went to provide backup to Mankato’s SWAT team.

The team has two specially-trained negotiators and paramedics. All members are cross-trained in each position, and the only specialties are snipers and medics. The local SWAT team trains monthly for 10 hours, and each member must train six hours on their own, too. Palmer said each member goes to basic and advanced training first and then “countless other trainings.”

He then showed us their many tools, which include a Kevlar vest that are much like military vests. Each member also has an M4 rifle and 40 mm grenade launcher. Then there’s flash bang distraction devices, large metal body “bunkers,” and tools that can knock a door down. Then there’s more specialized equipment like a rugged robot that shoots live video to a handheld device.

It was interesting to hear Palmer explain how prepared and trained the officers are to be part of the team. It’s also good to hear such a capable team is right in town to deal with intense situations.

Stay tuned for next week when I learn about bike patrol and the department’s drug investigation abilities.

Kelli Lageson is the special projects editor at the Tribune. She’s enrolled in a weekly Citizens Academy put on by the Albert Lea Police Department. Email her at kelli.lageson@albertleatribune.com.