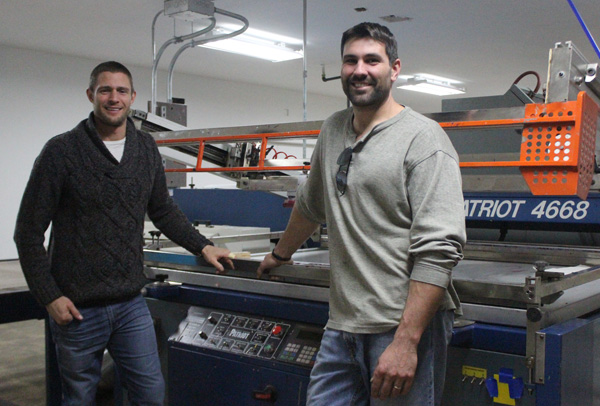 Erik Dahlgren, left, and Nathan Neitzell, right, recently opened Signs of Momentum in Hayward. Since opening they’ve been focusing on making corregated yard signs but would like to expand in the future. -- Kelli Lageson/Albert Lea Tribune

HAYWARD — If you see activity at 300 West St. in Hayward, it’s not that the old school has re-opened, it’s a new business. 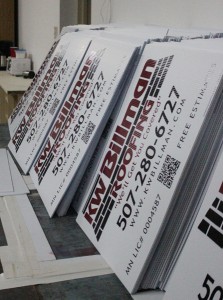 Signs are lined up against the print shop wall of Signs of Momentum in Hayward.

Childhood friends Nathan Neitzell and Erik Dahlgren just opened up Signs of Momentum in January, and though it started slow, the co-owners are busy now making mostly corrugated yard signs.

The most common size are 18-by-24 inch signs, and they’ve sold them mostly to businesses and politicians. But they’re also up for other jobs like printing onto T-shirts, magnets or other items.

“If it’s printed we can do it,” Dahlgren said.

Neitzell said the first few months of business were slow because of the winter season, so the two took the time to learn even more about the business.

“We dabbled and experimented,” Neitzell said.

He also said the political season has been heating up, and they’ve been getting calls asking about pricing and abilities. Businesses from roofers to plumbers have been asking for signs to be made — and not just businesses in Freeborn County — they’ve had requests from northern Iowa, Faribault, Owatonna, Rochester and all over the state. 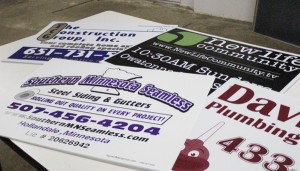 Shown are a sample of some of the recent projects Signs of Momentum has created.

As far as the location for their shop, they like the square footage and the opportunities for the future. Neitzell’s father originally bought it about 10 years ago and had thought about making it into apartments. Since it wasn’t a priority the building had been sitting empty until Neitzell and Dahlgren got to talking.

“We said ‘Let’s remodel this wing and put in a printing shop,’” Neitzell said. “We saw the need for it.”

The printing shop is open to the public whenever they’re around, or people can call and set up an appointment.

In the shop is a large printer that can print onto anything up to 4 by 6 feet. Printed signs then head into a dryer before another coat is added. They said they can print up to about four colors, on two sides, and most signs cost anywhere from $3 to $5, depending on quantity and color.

They also have a designer who can help customers decide what they’d like printed. Because they print the design onto clear plastic sheets they’re able to do detailed work that some others can’t.

“By having that set up we can do really small detailed stuff,” Neitzell said.