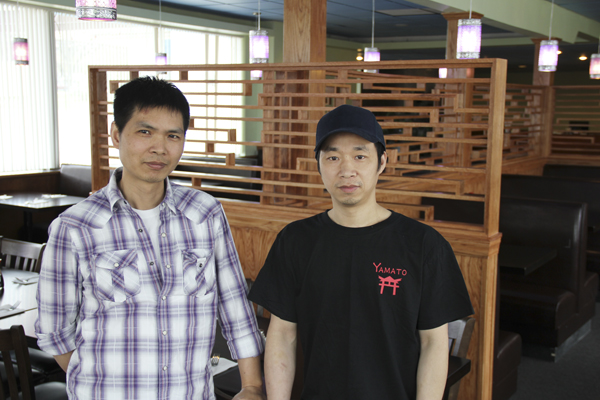 Joey Lin, left, and Kevin Chen are the owners of Yamato Steak House of Japan, a new restaurant at 2007 E. Main St. in Albert Lea. On Friday evening, the place was packed. -- Tim Engstrom/Albert Lea Tribune

Yamato Steak House of Japan opened Tuesday, and owners Joey Lin and Kevin Chen have remodeled the interior of 2007 E. Main St., which used to be the China Buffet. 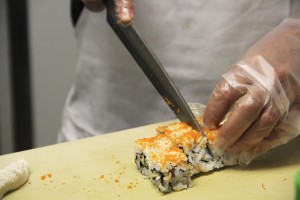 Albert Lea has American, Mexican and Chinese restaurants but no Japanese fare, said Lin. He said he knew the building would be available Oct. 1, and that’s when he began work making the place all new. Woodwork, lamps, a fountain and a bamboo overhang decorate the interior, which offers seating at tables or in booths.

The owners, who are from the Twin Cities, are new to Albert Lea. They learned the building was available and decided to start a Japanese restaurant. They repainted the exterior white for now but plan to make it more colorful. They eventually would like the parking lot to be spruced up, too.

Yamato was the name of an ancient province of Japan in what is now the Nara prefecture.

The restaurant has eight employees, with the sushi cooks coming mainly from the Chicago area, Lin said.

He said sushi, which is raw fish, rice and vegetables, is a health food that some people might be trying for the first time. He said it can be eaten as prepared but traditionally it is dipped into wasabi mixed with soy sauce.

Bob Carroll of Albert Lea was visiting Yamato for the first time on Friday and ordered a California roll, a type of inside-out sushi containing cucumber, crab meat and avocado, often sprinkled with tobiko or sesame seeds.

Carroll said he moved to Albert Lea 13 years ago from California and likes having Japanese cuisine as a local choice.

The restaurant also serves bento, which is a meal of rice, soup, salad, roll and sushi, along with a main dish such as teriyaki chicken.

It is a steakhouse, so that means Japanese steak, which is served already sliced so that it is easier for the elderly to consume. Types of steak are found on the hibachi menu, which also has salmon, shrimp, chicken and vegetarian fare. Desserts include ice cream tempura (fried ice cream) and fried banana.

Lin said people who have gone to Japanese restaurants in the Cities will find the prices at Yamato economical.

Lin said he hopes to acquire a liquor license so that he can serve sake, in addition to wine and beer. Sake is a Japanese alcoholic beverage made from fermented rice.