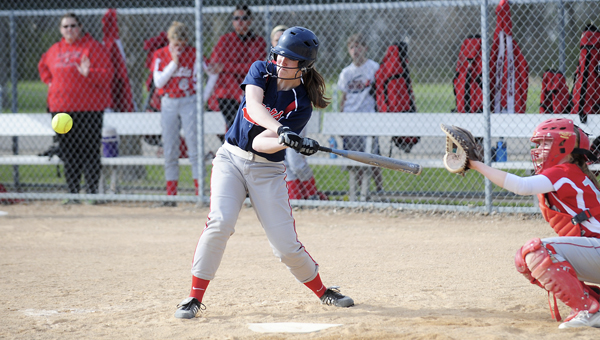 Claire Buendorf takes a swing in the bottom of the fourth inning in the first game against Austin on Thursday. -- Brandi Hagen/Albert Lea Tribune

The Albert Lea girls’ softball team lost both games of a double-header to Austin on Thursday. 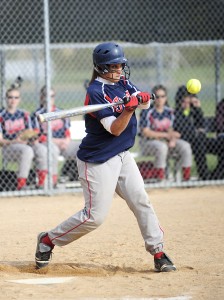 Tigers’ Dominique Villarreal swings at the ball Thursday in the third inning of a double-header against Austin.

The Tigers had a rough first game scoring their only run in the first inning. The Packers scored six runs by the end of the third and finished the game by scoring five in the top of the sixth for a 13-1 Tiger loss.

“We just didn’t have near the focus we should have, and we let them score some easy runs on mental lapses,” Tigers coach Dan Harms said.

“We settled down in the second game and played more as a team.”

The first inning of the second game was scoreless, but both teams scored in the second with the Packers leading 2-1.

“The game was much more competitive and enjoyable than the first,” Harms said. “The girls played much better defense and were much more focused.”

Between the fourth and seventh inning the Packers scored three more runs.

“We only had four hits to their 14, but we played better defense and made the plays that we needed to,” Harms said.

The final inning of the night was the Tigers’ best.

“The bats came alive a bit in the seventh,” Harms said.

The Tigers scored three runs in the bottom of the seventh bringing the final score to 5-4, a one-point loss compared to their previous 12-point loss.

“If they build on that and play more relaxed and solid softball we’ll be fine,” Harms said. “Even though Tuesday we run into Mankato West, who’s ranked fifth in state.”