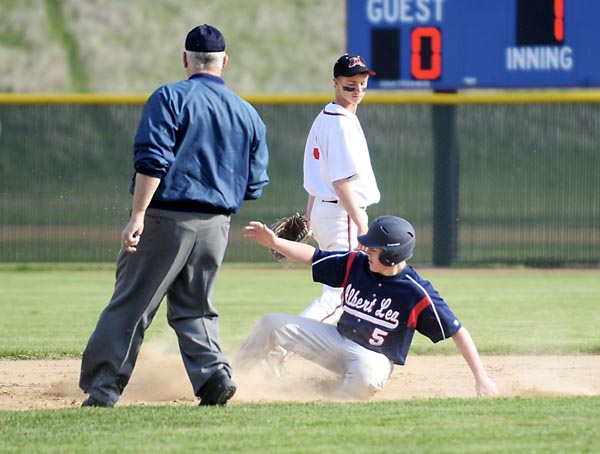 Derek Burkard slides into second on a steal in the bottom of the first on Tuesday at Hayek Field. -- Brandi Hagen/Albert Lea Tribune

“It was an exciting game,” Tigers coach Joe Sczublewski said. “We were able to capitalize on a few errors that they made, which was good to see.”

The Albert Lea baseball team beat Mankato by one run in the fifth inning Tuesday at Albert Lea’s Hayek Field.

The Scarlets scored both of their runs in the second inning giving them a 2-0 lead until the bottom of the third.

According to Sczublewski, Cody Scherff hit a ball to the left field fence for a double and then Dylan See-Rockers hit an RBI single. Derek Burkard was See-Rockers courtesy runner and made it to second on a wild pitch. Ethan Abben reached base on a single to the right and Cody Haaland hit a single to send Burkard home.

The game was tied 2-2 until the fifth inning when Abben scored a run for the Tigers.

Albert Lea had two outs with Abben on first when the Scarlet’s pitcher was charged with a balk. Abben was then moved to second. In the meantime, Haaland hit a grounder that Mankato West couldn’t get control of and Abben ran home from second.

Sczublewski said much of the Tigers’ success has come from their defense and their pitchers.

“See-Rockers pitched a complete game victory,” Sczublewski said. “That was a big shot in the arm for our team. Now we’ve had two guys with success on the mound.”

A play by the Tigers in the sixth inning kept the Scarlets from a tie game.

With two outs, Mankato West’s David Boswell walked to first and was able to steal second. On the throw, he tried to reach third.

“Makael Lunning scooped it up and threw a rocket to Lucas Hansen for a tag,” Sczublewski said.

The Tigers are now 3-1 for the season and will play Rochester Century, one of the top-ranked teams in the state, on Thursday.