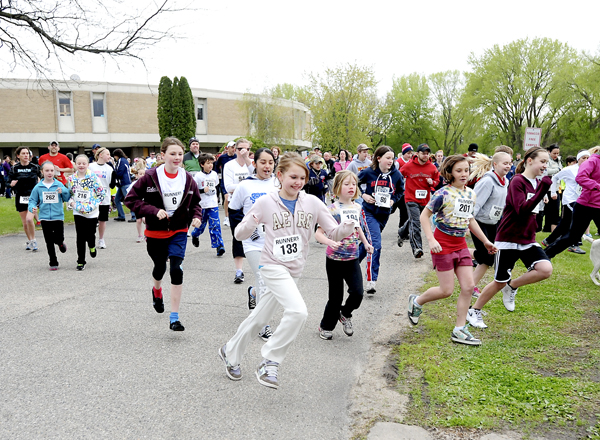 Rain showers held off until after more than 260 people crossed the finish line of Southwest Middle School’s sixth annual Tiger Trot on Saturday. 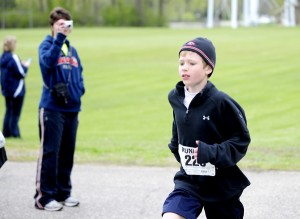 The Tiger Trot began at Brookside just after 9 a.m. and was a way for students, friends and family of the middle school to raise money for field trips and other expenses. Since its start, it has collaborated with the Albert Lea Family Y’s fundraiser, the Fountain Lake 5.

This was the 34th year for the Fountain Lake 5, and it had 61 runners particpating.

“The two events happening together allows people to choose the shorter run or the five-mile run,” Albert Lea Family Y director Dennis Dieser said. “We were able to share resources, which helps out both groups.”

Sixth-grader Levi Kermis designed the T-shirts given to registered participants. 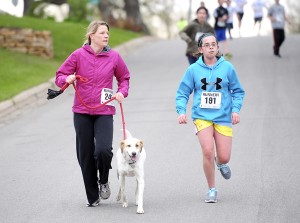 Southwest Middle School’s annual Tiger Trot was a chance for people and pets alike to get a morning workout.

“It’s great,” Kermis said. “It was fun seeing everyone wearing my T-shirt design when I just did it out of the kitchen for fun.”

Based on participation and the pledges they raised, students were awarded lunch, an early out to go swimming and breakfast on the lawn.

For anyone who participated, several businesses donated door prizes, including a Nook and many gift cards.

Placings were awarded among different age categories and also by male and female.

Jordan said the trot originally was created by teachers, but now more parents are getting involved which she is happy to see.

Children, adults, babies in strollers and pets all joined in the fundraiser.