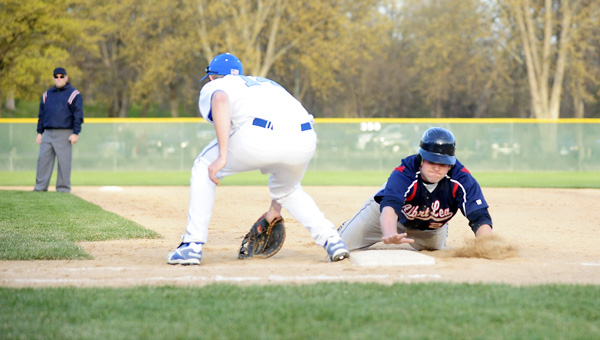 Brandi Hagen/Albert Lea Tribune Logan Enderson dives back to first base to avoid being tagged out.

OWATONNA — It was an unexpected but welcomed win for the Albert Lea baseball team Thursday as they beat the Huskies 8-2 at Dartts Park.

“We were optimistic that the kids could play as well as they did,” said Albert Lea coach Joe Sczublewski. “We played errorless ball today and when you play errorless ball and no walk guys, that’s the name of the game.”

Dylan See-Rockers scored the first run on a steal and Ethan Abben was forced home when Owatonna’s Jordan Howe walked the Tigers’ Cody Haaland to first.

In the top of the second, Cody Scherff, Johnathan Fleek and See-Rockers each had a run and Houston Sharpe finished the inning with a two-run single to give the Tigers their 7-1 lead.

Unlike Owatonna, which has returned several starters for the season, Albert Lea is starting fresh.

“It was a good confidence builder for us to beat a tough team like that,” Sczublewski said.

Sczublewski said the Tigers made fantastic plays, especially a running catch by See-Rockers that kept the Huskies from scoring two runs.

Tigers scored their last run in the third inning when Abben got a base hit and drove Scherff from second to home.

Owatonna’s Matt Simon scored the Huskies second and final run in the bottom of the third when he hit a home run with no one on base.

“All in all, I’m just thrilled with the way our defense played, and now we just need to hit the ball a little better,” Sczublewski said.

The Tigers will play at Rochester Mayo in a double header on Tuesday at 4 p.m.

“That will be a tough battle for us, but hopefully we’ll play as good of defense as we did today,” Sczublewski said.