A handful of members of the Lakeview Lions club planted trees Friday outside the new Edgewater Park Pavilion in honor of Arbor Day.

Assisted by Parks Superintendent Joe Grossman and city employee Monte Santee, the women placed dirt around the bases of three trees, which were placed in holes at various locations around the building. 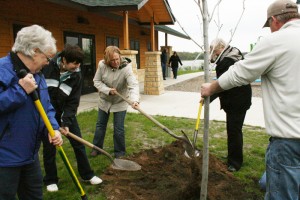 The group said they donated $500 toward the trees after seeing a similar project by the president of the international Lions Club. In fact, thousands of trees are being planted all across the country in response to the club president’s project, they noted.

Planting trees on Arbor Day, celebrated the last Friday in April, fit well because the holiday is a day when people are encouraged to plant and care for trees.

The first Arbor Day was in 1872, during which an estimated one million trees were planted.

City staff have also been planting other trees throughout the week at the park, including the Redmond linden, linden sentry, burr oak, Kentucky coffee tree, Valley Forge elm, crabapple and maple, among others.