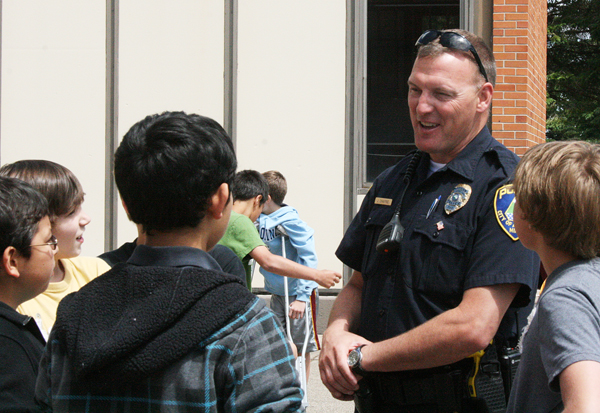 Southwest Middle School resource officer Jay Crabtree talks with a group of students Wednesday afternoon at the school. It is Crabtree’s last week at the school after the position was cut. He will be moving back to the night shift on patrol. -- Sarah Stultz/Albert Lea Tribune

As students socialized outside Southwest Middle School Wednesday after lunch, police officer Jay Crabtree participated in a quick game of hacky sack with a group of boys.

Dressed in his navy blue police uniform, clad with an Albert Lea Police Department patch, Crabtree was taking advantage of his last week as resource officer at the school. After this week, his position will be cut and he will move back to street patrol.

He will fill the position of one of two other officers, Rod Davis and Al Harris, who retired this month and last after more than 25 years each with the department. The other position will be cut from the force.

That leaves the department two officers short of what is was at just two months ago.

Albert Lea Police Chief Dwaine Winkels said with the departure of Davis and Harris, there will be 26 sworn officers in the department, plus one full-time and one part-time community service officer positions. A decade ago, there were as many as 30 sworn officers.

He and city staff anticipated these retirements at the beginning of the year, but because of budget concerns, his department, like others, will see a reduction in staff.

“If you have to lose positions, it is best to do it through retirements,” he said.

Winkels said the decision to eliminate Crabtree’s position at Southwest Middle School took place after discussions between city staff and the Albert Lea School District in the last three or four months.

He said the decision was mostly driven but budget cuts, but part of it was also driven by Crabtree’s workload. Many of his responsibilities could be handled by a counselor or dean of students and do not need to be handled by law enforcement, Winkels noted.

“It’s been good contact with the kids,” Winkels said. “And it’s a nice position to have if you can afford it, but you have to fill your street slots first.”

The city was paying for the position in the past few years, but when the position was first created in 2001, grants covered the costs of the job.

He said the city and school district will continue to fund the resource officer position at the high school. Officer Ted Herman has that job.

Despite the arrangement, Southwest Middle School Principal Jean Jordan and other teachers at the school Wednesday said they will miss having Crabtree at the school.

“Yes, he helped kids with crisis and with kids who are struggling, but he also showed us such a positive police force,” Jordan said.

Crabtree, who has been in the position since the position was created in 2001, said he has enjoyed his interaction with the students.

He said he has tried to develop relationships with the children so they are not afraid of communicating with a police officer and is proud when his former students wave to him and interact with him positively in the community.

He once received a letter from a girl he had helped years earlier, who thanked him for taking the time to help her.

In addition to his responsibilities at Southwest Middle School, Crabtree covered incidents at all four of the elementary schools and the Area Learning Center.