ROCHESTER — Without skipping a beat, Bryce DeBoer took first place in shot put at the Big Nine Conference meet at Rochester Mayo on Friday with a distance of 54 feet, 1 inch.

DeBoer has won every meet he’s participated in this year. 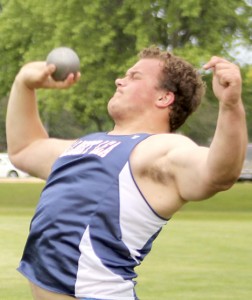 Senior Bryce DeBoer shot a distance of 54 feet, 1 inch on Friday to place first in a Big Nine Conference meet.

According to Tigers coach Kevin Gentz, of the six times DeBoer got to throw in preliminaries and finals, all landed past the 50-foot mark.

“It’s a great blessing,” DeBoer said. “I never knew I would be this successful at track.”

The next closest distance was 49 feet, 8 inches.

DeBoer said he knew if he threw well he would be able to beat the other competitor.

Gentz said DeBoer is in excellent shape heading into sections.

“He has worked hard all year to become stronger and more consistent,” Gentz said. “He is confident in his throws and is convincingly the Big Nine champion.”

DeBoer, who has already thrown over the state qualifying mark of 54 feet, 4 inches this season, is excited for the stronger competition next week.

On the track, Albert Lea High School junior Chrissy Monson raced toward two conference titles for the fourth year in a row.

Not only did Monson take first in both the 1,600-meter run and the 3,200-meter run, she was also named All-Conference. 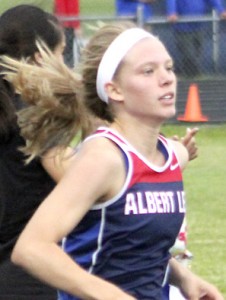 Junior Chrissy Monson placed first in both the 1,600-meter run and the 3,200-meter run. --Submitted

“She led both races from beginning to end, wire-t0-wire,” Tigers coach Margo Wayne said. “It’s a tremendous feat to win one event at our conference, but to win two events in the manner she did was just incredible.”

“It was one of those things you see in track meets that you’ll remember forever,” Wayne said.

“She was still pulling away right to the finish,” Wayne said. “She ran two incredibly smart races.”

Monson is excited for next week’s sections as the competition becomes tougher and the stakes get higher.

“I’ve got to get faster still, but we’re on track,” Monson said. “I wish everyone the best of luck, I just hope my best is better.”