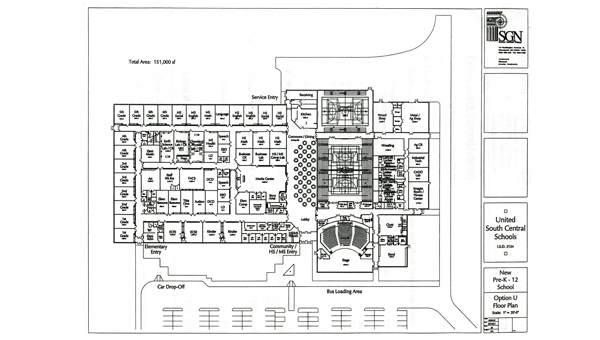 Shown is one of the plans for a new school for United South Central in Wells. There may be more tweaks to the plan if the referendum were to pass. -- Image courtesy Smiley Glotter Nyberg Architects

WELLS — Sensing that they won’t be getting a cooperative facilities grant from the Legislature, the United South Central school board plans to have a bond-issue referendum Aug. 14.

“It seemed apparent that our attempt to try and get a little help from the Legislature for funding did not work out,” Superintendent Jerry Jensen said.

He said that while the session isn’t over yet and a “miracle” could happen, the chances are not good. At a regular board meeting in April the board favored a plan to build a new building at a cost of about $28.8 million.

Jensen said at a workshop a week before the meeting the board spent several hours discussing the merits of the plans for a new building versus the plans for remodeling and adding on to the current building (which would cost around $20 million.)

“There was a lot of good discussion about tax impact,” Jensen said. “Finally they decided the best option would probably be for a new building.”

If the referendum were to pass, the board would like to move forward and start construction in spring of 2013, if possible. If the measure does not pass Jensen said the board will immediately begin working on a new plan.

“The entire board recognizes we have to do something here soon,” Jensen said. “There’s infrastructure problems that have to be addressed.”

The board will now have to formally make a resolution about the election, which will most likely happen in June. Jensen expects the board will host community presentations to show residents more about the plans before August. The board will get updated costs from Smily Glotter Nyberg Architects so it can provide updated tax-impact information to residents in the district.

These problems were highlighted last August when the school board hosted an event for the community to see the issues at the school.

One of the plans is the possible construction of a new building somewhere in Wells. No land has been bought yet for such a project, and the cost of an entire new building would be about $28.8 million. Construction would be projected to be started in 2013 if that option were chosen.

The new building would have two distinct areas. One area would be all classrooms that could be locked if there are events like sports games or concerts in the other area of the school. The public area would include the gym, auditorium and commons area. The new school would be designed to hold about 750 students; USC currently has about 650 students enrolled. The architects estimated the new building would last around 75 years.

This option includes remodeling the current building to address all the problem areas and also includes an addition of a new building that would house a gymnasium, a new kitchen and dining area. The cost estimate for this project is around $16 million.

Funding has been an issue for years, so many things at the school have been deteriorating including windows, doors, plumbing and heating and air ventilation systems.

• 5 districts in Minnesota have older buildings than USC

• 1952 year an elementary wing and gym were added

* Numbers are approximate and may be updated before referendum in August.