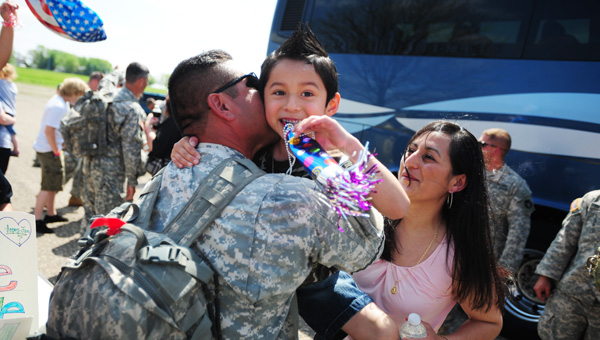 After a year of anxious waiting family members and friends finally got to welcome home their soldiers from Albert Lea’s Delta Company.

Right around noon two buses, escorted by local police and a group of motorcycles, pulled up to the Albert Lea Armory as the fire department sounded their sirens and friends and family cheered. The soldiers returned from a year-long deployment to Kuwait.

Wives, sons, daughters, moms, dads, grandparents, friends and more showed up to greet their soldiers and take them home. Gail Springborg was excited to see her husband, Sgt. Dan Springborg, and said she’s excited to be a whole family once again.

“It’s been one long year,” Gail said. “We’ve been trying to keep Dan part of the family, and now we get to be a whole family again.”

The two rode off on a motorcycle after he greeted other loved ones. Tasha Kilen, wife of Staff Sgt. Eric Kilen, said she was looking forward to having Eric home and said they’ve been working to keep communication open.

Some family members even had surprises planned for their soldier, like Keli Enser. Her husband, Sgt. David Enser, didn’t know that she was planning a special surprise while he was deployed. She, with the help of some friends, got David’s 1978 Ford Mustang running again, and she drove it right up to him after he got off the bus.

Lynsie Moritz was another Army wife, and she and 2-year-old Grayson were there to welcome home Staff Sgt. Matt Moritz. Other than a two-week leave in January she hasn’t seen him since last July.

“In the next month we’ll just get used to him being home,” Lynsie said. “We expect to get into a routine this summer.”

The local Family Readiness Group leader Tammy Estes echoed that thought and said that while the homecoming is one fun day, soldiers reintegrating into family and civilian life is a process. She said the group is still there to help families even though the soldiers have returned.

The soldiers were stationed at Camp Buehring in Kuwait and helped with Operation New Dawn. The group’s mission changed several times from providing security at the base to providing security to convoys in and out of Iraq and even training to become a Mobile Reactionary Force.

Delta Company is part of the 2nd Battalion, 135th Infantry Regiment within the 34th “Red Bull” Division of the Minnesota National Guard.

Nearly 3,000 Minnesota soldiers, the largest deployment of the state’s soldiers since World War II, have been returning this week.

Delta Company first deployed May 31, 2011, to Fort McCoy in Wisconsin and then to Kuwait. At the end of April troops went to Camp Shelby in Mississippi for demobilization, or the transition between deployment and return to civilian life.