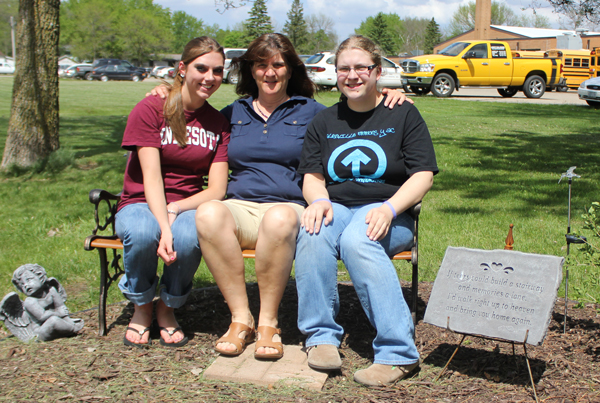 From left are Alison Wangen, Brenda Koch and Elise Nyenhuis. Wangen and Nyenhuis have been selling T-shirts, bracelets and bumper stickers to give donations in Kayla Koch’s name. Kayla died last year in a dune buggy crash near her home. -- Kelli Lageson/Albert Lea Tribune

GLENVILLE — With the school year wrapping up, two girls at Glenville-Emmons High School are finishing a cause they’ve been working on since last summer.

Elise Nyenhuis and Alison Wangen were good friends of Kayla Koch, a 17-year-old who died in a dune buggy crash last July. Since then the two girls have been selling keepsakes to raise money to donate to causes Kayla supported. The two worked closely with Kayla’s mom, Brenda Koch. 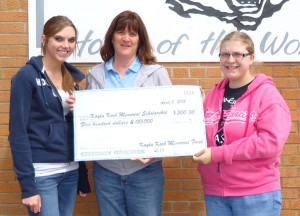 “It was their idea from the very start,” Brenda said.

All the items they sold, including T-shirts, bracelets and stickers, were decorated with a purpose. The T-shirts read “Look Inside & Be Strong” on the front and had Kayla’s name and a seven on the back. The quote on the front of the shirt was one of Kayla’s last posts on Facebook.

The bracelets are purple, one of Kayla’s favorite colors, and most of the items include butterflies. Not only did Kayla like butterflies, but some were present the day of her crash and there have been other coincidences with butterflies that made Nyenhuis and Wangen want to use them on the items.

Nyenhuis said altogether they’ve raised $950. A large part of that — $500 — will go to a scholarship fund in Kayla’s name to go to one graduating senior. The remainder was split between the Salvation Army and the Humane Society.

“Those were her interests,” Nyenhuis said.

Nyenhuis and Wangen said they weren’t purposefully trying to raise money at first and that they originally just wanted to keep Kayla’s memory alive by having physical items other students could buy.

“We wanted some way to keep her memory alive and keep her in our hearts,” Wangen said.

The two girls are mostly done fundraising, though there are more items available through the end of the school year. They’ll both be heading to Riverland Community College in the fall. Brenda said it’s difficult the closer the students get to graduation because they don’t want to forget Kayla, but that with the pieces they’ve made like T-shirts and bracelets it will be hard.

The school also dedicated a memorial garden to Kayla in October. It has a small bench with three names, Kayla’s and Christa Moffitt and Kelly Maher. Moffitt and Maher died in 2004 in separate car crashes. The school planted trees for the girls, too.

“We know her spirit lives within us,” Brenda said.