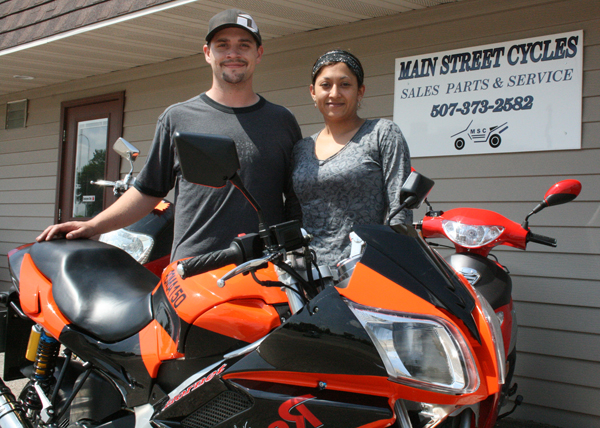 In an economy where most people are trying to save money, one local company is reaching out to customers to do just that — and have a little fun. 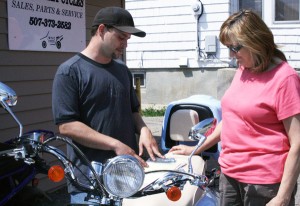 Opened May 1, Main Street Cycles — at the corner of West Main Street and First Avenue — is offering scooters that could see as much as 100 mpg.

With gasoline prices hovering around $3.60 a gallon, owners Jerry and Elizabeth Latham said people are taking advantage of the cost-saving vehicles and have been coming in to check them out.

One couple, Steve and Pootie Reed of Albert Lea, purchased a powder blue scooter Friday and were excited to try it out.

“We’ve been looking at these for a long time because of the gas mileage,” Pootie said. “It’s perfect for in Albert Lea.”

Steve said his wife already has a 30 mpg vehicle but was interested in the scooter just for driving around town. It has the potential of saving at least three times the gas mileage. 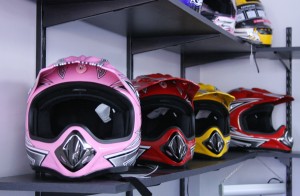 Helmets line a shelf in Main Street Cycles on Friday.

They plan to purchase one for Steve as well.

Jerry Latham said his wife only filled up the gallon and a half tank on her scooter — costing about $5 each time — probably four or five times the entire summer last year.

“Everybody is looking for a way to save money these days,” Latham said.

He said he has been interested in scooters for his entire life, though he started out with mini bikes as a kid and learned how to fix them.

He has worked for other companies in town fixing scooters and decided if he’s already fixing people’s scooters, he might as well be the one to sell them, too.

“It’s been a lifelong dream,” he noted. “We have so many dreams that pass us by in life. It still hasn’t really sunk in yet.”

The business offers scooters ranging from 50cc all the way up to 250cc, along with dirt bikes for kids. The scooters come from Roketa, a Chinese-based manufacturer.

Latham said he decided to lease out the property, on the corner of West Main Street and First Avenue, because of its location.

“It was all about visibility for us and affordability,” he said.

Plus with living nearby, it was a perfect fit.