The memorial service for Genevieve “Gen” Violet Folven will be at 11 a.m. Monday at First Lutheran Church in Albert Lea. The Rev. John Holt will officiate. Visitation will be from 5 to 7 p.m. Sunday at Bonnerup Funeral Service in Albert Lea, as well as one hour prior to the service at church. Interment will be in the Trinity Cemetery in Kiester. 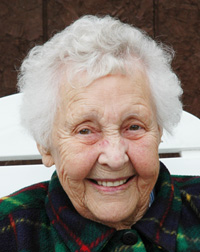 Genevieve Folven passed away early Wednesday, May 2, 2012. She was 93 years old.

Genevieve was born on March 28, 1919, in Lake Mills, Iowa. The daughter of John and Anna (Twedt) Moe, she graduated from Lake Mills High School in 1937. On Aug. 19, 1939, she married Omer Folven in Scarville, Iowa. Gen worked while Omer attended Luther College and at Camp Upton, Long Island, N.Y., during World War II while Omer was stationed there. The family lived in Ackley, Iowa, and Blooming Prairie before purchasing a farm in Austin.

Gen enjoyed life on the farm and was known for providing guests with great meals and friendship. Much of her life was focused on raising her five children and she always made it to sporting events and other activities. She loved to fish and travel, but especially enjoyed the family vacations at the lake surrounded by children, grandchildren, great-grandchildren and friends. In 1994, they sold the farm and moved to Albert Lea. They split their time between their cabin on Burnt Shanty Lake near Grand Rapids, and their condo in Albert Lea. They spend 72 years together before Omer’s death in 2011.

Genevieve is preceded in death by her parents; husband, Omer Folven; one brother and four sisters.