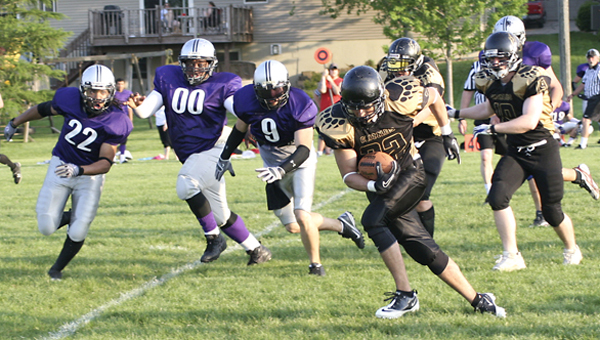 Albert Lea Grizzlies’ Steven Salinas takes off with the football Saturday at Southwest Middle School. The Grizzlies won 50-12 over the Silverbacks.

The Albert Lea Grizzlies dismantled the visiting Minnesota Silverbacks on Saturday. When time expired the score was 50-12.

The Grizzlies opened the game with a strong drive down the field with passes completed to tight ends George Gerdes and Trent Leesch, setting up a 10-yard touchdown pass to Gerdes. The extra point try was no good. 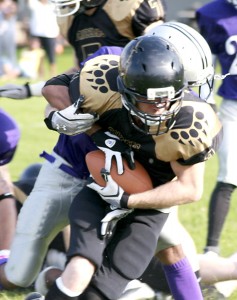 Both teams struggled to move the ball offensively for the remainder of the first half.

The Grizzles’ defense stood strong in the second quarter with back-to-back sacks and a fumble recovery by defensive end Tyler Trende. The Silverback’s defense forced a turnover of their own when they intercepted a pass from Tony Tolbers intended for Michael Carr. At the halftime break the scoreboard read Grizzlies 6, Silverbacks 0.

The Grizzlies came to life in the second half after a quick stop of the Silverback’s first possession, marching down the field with a dominating rushing attack. Mikey Salinas broke open a full back dive play and scampered straight up the middle 20 yards for the tight end. His brother, Steven Salinas, added the two-point conversion with an outside run. With that, the Grizzlies had widened their lead to 14-0.

Grizzlies defensive back Levi Fossen ended another one of the Silverback’s offensive possessions a few plays later with an interception and a nice return.

The Grizzlies capitalized on the turnover immediately with quarterback Tolbers hitting wide reciever Carr in the end zone for a 26-yard touchdown reception, tacking on six more points.

The two-point conversion attempt from Tolbers to Gerdes failed.

The Silverbacks retaliated moving the ball with some quick passes of their own and capped the drive with quarterback Sahmad Nakumbe hitting wide reciever Brendon Brown on a short post route in the middle of the field.

Brown was able to outrun the defenders and put the first points on the board for the Silverbacks. The two-point conversion attempt was intercepted by Fossen, and the third quarter ended with a score of 20-6.

To open the fourth quarter the Grizzlies put together another punishing rushing drive, capped by a 7-yard touchdown run and a two-point conversion run by running back Steven Salinas making the score 28-6.

The Silverbacks answered once again after a long kickoff return with a play similar to the previous scoring play; a 42-yard touchdown strike from Nakumbe to Brown.

Again the two-point attempt failed, but the Silverbacks had narrowed the margin to 28-12.

The Grizzlies seemed to have an answer for everything in the fourth quarter as they mixed up the personnel package with Tolbers moving to tight end and Paul Ciochetto taking the helm at quarterback.

A combination of quick runs and passes effectively moved the ball down the field, and Ciochetto finished the drive with a 15-yard touchdown throw over the middle to a wide open Tolbers.

The two-point conversion attempt failed, and the score was now 34-12.

The Silverbacks tried to answer again but stalled early when the Grizzlies defense forced a fumble that was recovered by defensive end Anthony Ingram.

The Grizzlies continued to run the ball up the middle and added six more to the scoreboard as running back Gerdes broke free and ran in a touchdown from the 8-yard line.

Gerdes’ number was called again and he was able to fight his way into the end zone, and then added two more points to the scoreboard with a successful conversion attempt, 42-12 Grizzlies.

The Silverbacks started to look a little more desperate and started trying to force long passes down the field, trying to mimic their earlier successes.

Ingram came onto the field as a blocking tight end for the two-point attempt and found himself open in the end zone and pulled in the pass from Ciochetto to make the score 50-12.

The Silverbacks were moving the ball as the final seconds ticked away, but it proved to be too little too late.

“In the end, the score was reminiscent of the game we played against the Silverbacks last year in Albert Lea, 74-6, but their team has improved tremendously.

“They had more depth, more athletes and more pride than they did last year. They are still a relatively new team and we expect to see them grow and improve substantially through this season and those to come,” said Grizzlies president Craig Schmidt. “We struggled to find a rhythm on offense after that first drive, but our defense did a nice job all game long, and we were able to run the ball very effectively in the second half, which resulted in a lot of points and ultimately the win.”

The football league is on bye next week for the Memorial Day holiday, but the Gridiron action resumes in Albert Lea on June 2 as the Grizzlies have a home game against the rival North Iowa Bucks from the Mason City area at Southwest Middle School Field, with kickoff scheduled for 6 p.m.

The last time the Grizzlies played the Bucks was in week one of the season, and the game ended in with a 19-18 Grizzlies victory in double overtime.