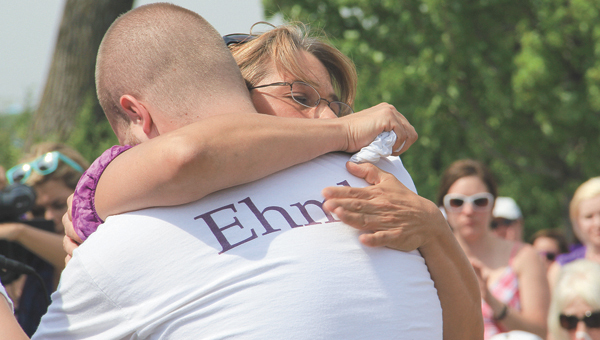 AUSTIN — To many in Rachel Ehmke’s family, Saturday was proof the 13-year-old did not die in vain.

Hundreds attended the Walk for Rachel, an event to remember the Kasson-Mantorville student who committed suicide in April and to bring awareness to the effects of bullying.

Despite all the tears shed at Saturday’s walk, there was plenty of reason for hope.

After Rachel’s family led hundreds of people in the walk around Mill Pond in Austin, Rachel’s father, Rick, said the support and increased awareness about bullying has taken some of the sting off the tragedy.

“It makes me feel like her death means something,” he said.

The walk started with attendees lining the path by the Mill Pond parking lot to welcome the Ehmke family, with Seth Prehn, Jess Smith, Kayla Schrom and the other organizers holding hands at the front.

The Ehmkes arrived and led the crowd to the pavilion, where organizers spoke before starting the walk.

Elizabeth Endicott spoke and led a prayer. While she said she’s now old enough to be a great-grandmother, she said she still remembers being called a whore in a confirmation class as a child in Wisconsin.

“I didn’t know what it meant,” she told the crowd. “I was so naïve. I went home and had to find a dictionary to look it up, and I cried and I cried.”

Endicott called the adage “sticks and stones may break my bones, but words will never hurt me” a “bunch of crap.”

“Words kill — way worse than anything else — they hurt,” she said.

Endicott commended the crowd for taking a stand to put a stop to bullying and said the day was a celebration of a life that was too short.

“It’s a horrible tragic thing that a girl had to die because of what was done to her,” she said. “But her life will not be in vain because you have loved her so much, because you are here, and because you have said, ‘We are not going to let this happen anymore.’”

Rick said the support has helped the family cope with his daughter’s death.

“It’s really helped us heal — or start to heal, because it’s really a life-long process,” he told the crowd.

Rachel’s mother, Mary, said all the money raised at the event would go toward efforts to prevent bullying and suicide.

“We will dedicate ourselves to the goal of making sure we do not lose one more child to bullying, to make sure our children know that there are options to get help,” she said.

Saturday’s walk was organized by a group of Austin teenagers and 20-somethings. Many of them didn’t even know Rachel or knew someone in her family.

Smith and Prehn were hanging out and started talking about Rachel’s death and decided to do something. They started small by buying 100 bracelets and then increased it to 1,500.

Smith, who didn’t know Rachel but knew some of her cousins, said the idea blossomed into Saturday’s event.

“Everything just escalated so much,” she said.

Schrom, another organizer, was waiting to meet Rachel’s sister, Brittany, the night of Rachel’s death when she heard the news.

“I was in the middle of Applebee’s and I just started bawling,” she said.

Since Rachel attended school in Kasson/Mantorville and lived in Kasson, Schrom wasn’t sure what kind of response to expect in Austin. She said some people even chastised the organizers, saying they were doing it for attention. But for Schrom, the main goal of the event was to raise awareness about bullying.

“I’m just so happy that we have this many people here,” she said. “I underestimated Austin. I did not think we were going to have this big of a turnout. It’s amazing that we really do.”

Along with the walk, a number of venders were on hand selling items, organizers sold T-shirts and bracelets, and there was a raffle.

Even before Saturday, the event had raised about $3,500, according to Smith.

“We almost underestimated ourselves, because we didn’t know if we could make that big of an impact,” Smith said.

Prehn said he was happy to see how many people showed up.

“The response is great,” he said.

However, Schrom admitted the positive response was bitter-sweet.

“I think it’s so great that this many people are pulling together,” Schrom said. “It is upsetting that Rachel had to do this for this to happen.”

‘It does not end here’

Schrom praised the Ehmke family — especially Rachel’s sister, Brittany — for getting involved and telling Rachel’s story to help stop future bullying, something she’s not sure she’d do in their situation.

“I would clam up,” Schrom said. “I am so proud of Brittany.”

Since Rachel’s death, Rick said he’s learned thousands of people die in suicides related to bullying each year. In fact, he’s spoken with or e-mailed the families of multiple other teens who committed suicide the same day as Rachel.

“I didn’t realize how deep a problem this really was,” he said.

However, Rick said he doesn’t blame anyone for Rachel’s death.

While Smith urged people to think before speaking or chastising someone, she, also, was pointing fingers.

“Everyone gets bullied,” Smith said. “Everyone’s on both sides. No one is innocent here. … I’m not innocent either.”

While the increased awareness has given her family a sense of purpose, Rick said it’s also been therapeutic to share Rachel’s story.

Rick said it’s too early to know specific charities the money raised Saturday will go to. He also said he’s not sure what’s next for the family; however, he said they plan to stay involved.

Saturday’s walk was likely not a one-time event. Smith said the organizers are planning on the walk returning for a second year in 2013, and she said they hope it becomes a yearly event.