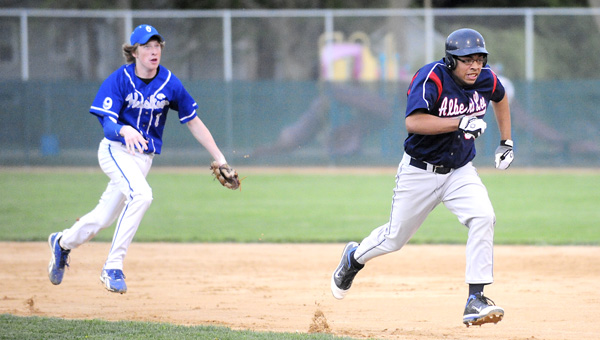 An Owatonna player runs after Houston Sharpe to get a tag between first and second base in the first inning.

What started out in the Tigers’ favor on Thursday did not end the same.

After four innings, the Tigers had a 1-0 lead over the Huskies.

The Tigers were spared one more inning before the Huskies scored over the next three.

“They took advantage of our errors,” Tigers coach Joe Sczublewski said. “Against a good team, you have to make all the plays.”

In the sixth inning the Tigers had the bases loaded when Owatonna center fielder Caleb Satterlund caught a hit by Tigers’ Zach Bordewick.

“It was a sensational diving catch,” Sczublewski said. “It kept us from two runs. The inning would have kept going, but that was the third out.”

Sczublewski said Huskies pitcher Jordan Howe was tough to face and kept the Tigers off stride.

“You have to tip your hat to him — he pitched very well,” Sczublewski said.

While Albert Lea’s Cody Haaland pitched most of the game, the Tigers put in two relief pitchers toward the end of the game. Both Lucas Hansen and Makael Lunning threw pitches to the Huskies.

“Cody was getting tired, it was hot out there,” Sczublewski said. “They were starting to catch on to him.”

Sczublewski said Hansen was a good relief pitcher, but he was a little out of the strike zone, so Lunning stepped in.

“We are having a good year,” Sczublewski said about the Tigers who are 7-4 overall. “Tonight wasn’t a good game for us, but the kids played hard and gave it their all.”

The Tigers play again Saturday at Rochester Mayo. The game is set to start at 1 p.m.