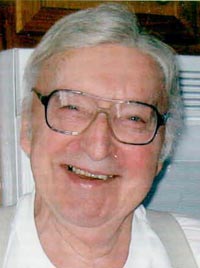 Jerry was born Dec. 17, 1926, in Steele County to Frank and Mary (Simeck) Wesely. Jerry attended and graduated from Owatonna High School. On May 9, 1946, he was united in marrage to Mary Jane Wavrin at Sacred Heart Church in Owatonna. Jerry and Jane had four children. Jerry worked for Northwestern Bell for 38 years in various towns in southeastern Minnesota. On Sept. 4, 2003, Jerry was united in marriage to Georgia (Dolly) Thiele. They resided in Austin.

Funeral mass will be celebrated at 11 a.m. Thursday at Saint Augustine Catholic Church, Austin. There will be a 6:30 p.m. prayer service today at Mayer Funeral Home where friends may call from 4 to 7 p.m. today and one hour before the service at the church on Thursday. An honor guard will be provided by the Knights of Columbus Fourth Degree, No. 1201 of Austin. Interment will be Calvary Cemetery. Memorials preferred to the American Cancer Society or donor’s choice.