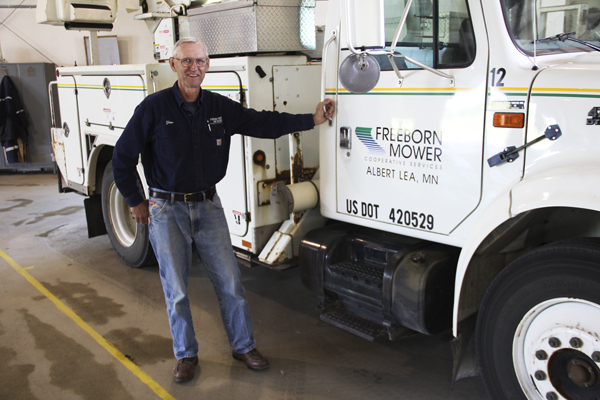 Gene Pederson leans Monday on the truck he used to operate and maintain. He retires this month after 44 years working for Freeborn-Mower Cooperative Services. -- Tim Engstrom/Albert Lea Tribune

After 44 years on the job, Gene Pederson of Freeborn-Mower Cooperative Services is going to retire.

The meter technician and lineman will turn 65 on May 30 and plans to make May 29 his final day of work. His reason?

“It’s time. I don’t know what else to say,” Pederson said.

Pretty much anyone in the power business in southern Minnesota knows him. He doesn’t take shortcuts and does a job right. He’s a stickler for perfection.

“I’ve always taken pride in the work I do.”

He said he is in good health, though he has noted he hasn’t been on call for the past three years. He said he just didn’t feel ready to step down when he was 62.

The most rewarding aspect of 44 years of work for the power cooperative, he said, is the day-to-day appreciation of the members and fellow workers for a job well done, especially after fixing an outage and restoring power.

Pederson grew up in Hartland and resides in the town to this day. He graduated from New Richland-Hartland High School in 1965.

He started at Freeborn-Mower as an apprentice lineman in 1968. He had taken courses at Dunwoody Institute in Minneapolis. He had worked as an electrician during summer months and decided he liked working outdoors in a rural setting more than going into barns and attics.

“Freeborn-Mower has been an exceptional place to work,” he said. “It’s been a rewarding career.”

In 1972, he became a journeyman lineman but his training as an electrician became an asset because in 1980 his job title added meter and load management technician, in addition to lineman.

“Back in January 1968, when I began my work with the cooperative, I thought a 10-year employee had been here forever,” Gene said. “I don’t know where all the years have gone.”

He said one of the biggest changes he has seen over the years is the types of accounts Freeborn-Mower Cooperative Services has. The power provider’s service area was primarily rural but some areas have become neighborhoods and even industrial parks. The Poet Glenville ethanol plant is a Freeborn-Mower customer.

The last all-nighter he pulled was on a late Friday thunderstorm in June 2011. He said the worst outage of his career was the Halloween ice storm of 1991. He said it affected Freeborn and Mower counties and took 12 days to restore all power. An ice storm in 2003 hit eastern Mower County hard and took three or four days, he said.

Tornadoes and other forms of wind can cause damage that is hard to believe but ice storms are far more widespread, he said. Lightning frequently requires linemen to go out and restore power.

“In all the years I’ve been here, I am still amazed at the power of lightning and ice,” he said.

Pederson enjoys woodworking at a workshop he has in Hartland. He builds cabinets and furniture there.

Freeborn-Mower employees, board members and Pederson’s family will gather in mid-June for a party to honor the long-serving lineman.