Making music for the fun of it 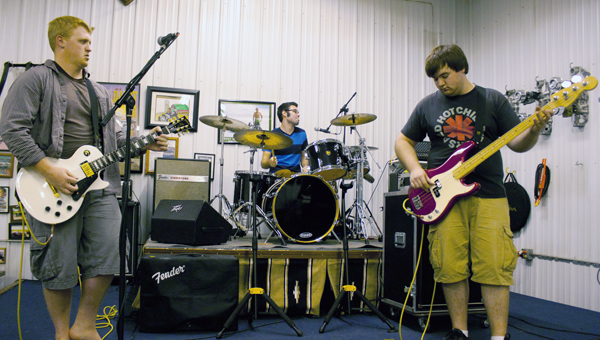 Chris Anderson, Tim Stoneking and Mike Dyrdal of PanicSwitch during one of their band earlier in May. -- Kim Kwapick/Albert Lea Tribune

Local band Riptide has now changed its name to PanicSwitch, but they’re still making music just for the fun of it. Band members include Tim Stoneking on drums, Mike Dyrdal on guitar, Chris Anderson on guitar and lead vocals and Kelsey Thomas on bass guitar and keyboard. Read on for a Q&A with the band. 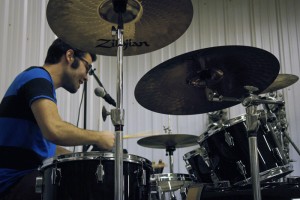 Tim Stoneking plays the drums and does some vocals for PanicSwitch. -- Kim Kwapick/Albert Lea Tribune

How did you form into a band?

We formed for Tiger’s Roar one year, and just stayed with it after that.

What is the story behind the name?

There isn’t a real story behind our name. We just picked it because it sounded cool to us. We switched from RipTide to PanicSwitch though because of band issues and some old members were going to school, and we wanted to continue playing without them. 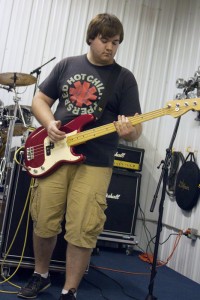 Mike Dyrdal fills in as bass guitarist for PanicSwitch because bandmate Kelsey Thomas was absent.

How would you describe your sound?

We’d call our sound blues/punk. Our influences are mostly blues inspired, but we really love playing punk so it is a cross between the two.

What inspires you to make music?

We just like being in a band. It’s really cool being able to make music and understanding how it all goes together. It’s fun making our own as well and having our own stories to our music.

Name some of the songs your fans like best and why?

Our fans really like our cover songs like “Sugar We’re Going Down” by Fall Out Boy and “Holiday” by Greenday; we think it’s because people really like things they already know. Of songs we’ve written fans really seem to like “Meant to Be.” It’s pop/punk and a stereotypical happy love song.

Where do you hope to go as a band?

We don’t expect anything but jamming for fun and making music with our best friends. That’s pretty much our whole point with this band. It’s fun for us so that’s why we do it. 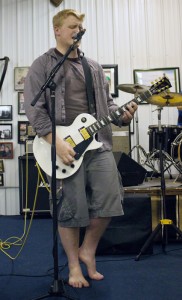 Chris Anderson is the lead vocalist and guitarist of PanicSwitch.

Where can people buy your music?

We don’t actually have any CDs available. We have some live recordings, but they didn’t work out too well or didn’t record the way we wanted them. We’ll probably have something out one day, but at the moment we don’t really have anything. We have a Facebook page: PanicSwitch.

Which musical performers inspire you the most?

We’re inspired by Led Zeppelin, Foo Fighters, Jimi Hendrix, Eric Clapton, My Chemical Romance, Blink 182 and Stevie Ray Vaughan just to name a few. Our songs are a lot like Blink 182’s because they have a lot of three-chord songs, and that’s the type of songs we make typically.