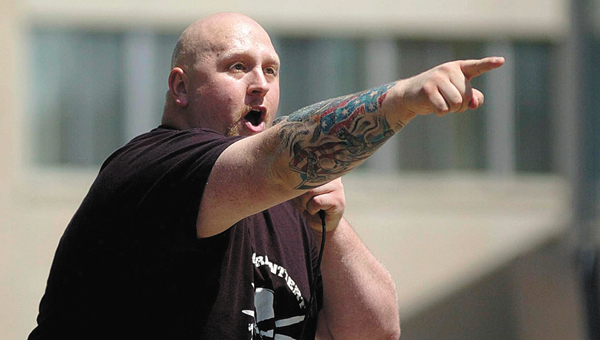 National Socialist Movement member Samuel Johnson, an organizer of a rally against illegal immigration in 2010 at the Mower County Veterans Memorial, shouts at pro-immigration protesters. He has ties to a man believed to have targeted the Mexican consulate in St. Paul.

MINNEAPOLIS — A Minnesota man with suspected ties to white supremacist groups planned to attack the Mexican consulate in St. Paul, believing it would stir debate on immigration amnesty issues ahead of the 2012 presidential election, according to a federal affidavit obtained Thursday by The Associated Press.

Joseph Benjamin Thomas also told an undercover FBI agent he considered himself a “domestic terrorist” instead of an American and would risk his life for the white supremacist movement in the event of a “race war,” the FBI affidavit said.

A man from Austin, 31-year-old Samuel James Johnson, is reportedly his partner in forming a supremacist group.

The document, recently unsealed in federal court, provides new details about the investigation into Thomas’ alleged plan. He was indicted in April on drug charges, though authorities had been watching him and another man since 2010 as part of a domestic terrorism probe. The affidavit said he’d amassed weapons and wanted to attack minorities, people with left-leaning political beliefs and government officials.

Thomas, 42, is not facing any terrorism-related charges. His attorney did not return a phone message Thursday, and the U.S. Attorney’s Office declined to comment.

“We consider him a threat, and we believe he had the capacity to carry these threats out,” FBI spokesman Kyle Loven said in an interview Thursday. “This was a lengthy investigation, and it was driven by our belief that the intentions of these persons were sincere.”

In addition to the plot against the consulate, the FBI alleges, Thomas had collected license plate numbers of people with Barack Obama bumper stickers and had asked an associate to volunteer at a left-leaning bookstore to obtain customers’ addresses.

The affidavit alleges that Thomas and Johnson, who was arrested in April, were trying to form a supremacist group with a militant wing. Thomas told an undercover agent he expected a race war within two years and that his group would be able to control an interstate and airports to prevent the military from coming into Minnesota, the affidavit said.

In the plot against the consulate, Thomas allegedly told an undercover agent he wanted to steal a pickup truck, load it with barrels of oil and gas, drive it into the consulate and allow the mixture to spill, then set it ablaze with a road flare. Thomas also said he’d found recipes for the mixture and instructions for making napalm, the affidavit said.

The affidavit alleged Thomas wanted to carry out the attack on May 1, a day used in recent years by activists in the U.S. to hold rallies for immigrant rights. But he later said the attack couldn’t happen that day, blaming personal reasons and noting more police were in the area, the affidavit said.

FBI agents reported seeing Thomas conducting surveillance on the consulate building in December. At that point, he told an undercover agent he wasn’t sure if the plot should move forward but continued to develop it and found a place where 55-gallon barrels could be stolen.

Thomas also suggested placing hoax explosive devices along the May Day parade route in the Twin Cities, saying he had video of prior parades so he could identify parade participants.

Ana Luisa Fajer, the consul of Mexico based in St. Paul, said the consulate was “duly and timely” notified of Thomas’ alleged plot.

“We take these threats very seriously and appreciate the full support we have received from the outset,” she said in a phone interview, adding that the consulate’s security protocols have been reinforced.

“Expressions of hate are the ones that motivated the alleged plotter,” she said. “These things exist, but we definitely think it’s an isolated voice here.”

Thomas, from the St. Paul suburb of Mendota Heights, was indicted on four charges related to possession and sale of methamphetamine, while Johnson, of Austin, was indicted on weapons charges. The indictment said Johnson’s prior convictions barred him from having weapons, though he was found with five — including a semi-automatic assault rifle — and more than 1,000 rounds of ammunition.

Mark Pitcavage, director of investigative research for the Anti-Defamation League, which tracks extremist groups nationwide, said weapons charges are common in such cases because it’s hard for prosecutors to prove terror charges based on someone’s planning.

According to an affidavit unsealed last month, Johnson was a former member and Minnesota leader of the National Socialist Movement, a white nationalist group, and he and Thomas were trying to form a spinoff group called the Aryan Liberation Movement with the intent of committing violence.